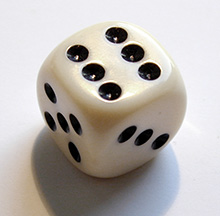 My last post, Game Placebo, got a lot of good feedback – more positive and constructive than usual, I’d say, which is nice. I also sent the article to DanC, who responded to me directly about it. He then wrote a G+ article about the topic of randomness, which led to a Lost Garden article. I feel happy to – at least partially – have been the inspiration for a Lost Garden article, being that that blog was my primary inspiration to begin writing about games almost a decade ago.

My position is that output randomness should not be a part of ideal game design. Right now I’ll try to break down my reasoning into discrete blocks that should help conversation about it.

I’ve put this in a list format.  Please read each point, and let me know which point does not work for you, and why (if any).

Randomness should not be a part of ideal game design.

Please read this section before commenting to avoid posing a straw-man argument.

So there you have it.  My points, along with some clarifications.  What points do you object to?  Let me know.  I’ll probably update this with more clarifications as people comment.