Hi! I’ve been thinking about writing this for awhile, and it’s time I just put pen to paper and got it out there.

I started working on Escape the Omnochronom! back in 2015. It was the game that I really learned to use Unity on. The first version of it was like a Threes-style abstract row/column sliding strategy game called People Skills. The second version of it was a big, RNG-laden L-shaped combat game (actually, this was the most similar to the final version, in hindsight) called Battle Blast: Lanes of Death. The third version was the one that I attempted to Kickstart, which had a weird gem-combining mechanic and it was the first one where characters like Tennor began to appear. This version, and the following version, was called Push the Lane!

Then, in Summer of 2017, I had some kind of weird manic breakdown or something, and was working 12-18-hour days, streaming most of it on Twitch, working my ass off on the fourth version of the game, which mechanically worked a lot like the release version, but thematically was this bizarre silly thing where you fought potatoes and weird triangle monsters and it was just very silly, and didn’t help people understand the game at all.

Finally, with the fifth version of this game, I created the Omnochronom theme, and made numerous massive gameplay changes which you see in the current version of the game.

Anyway, that’s the history of the game. 2018 was spent going over and over the ruleset, cutting massive features, creating new ones, spending a lot of money on art and coders and sound people to help fancy-up the game in a way that I’ve never done for a game before. I fully animated the two main characters by hand. It had a full deckbuilding system, a whole metagame with unlocks, multiple game modes, a comic (still available here) and a lot more. We brought the game and exhibited it at Play NYC 2018, and I made a bunch of merch.

Right now, I don’t think the game is very fun to play. I think you can play it, it’s playable, it’s functional, and maybe it’s interesting, but it’s just not very fun. As I said, I spent most of 2018 chasing the vision. The last patch was in November, and I’ve spent the last two months now just ruminating on what should be next for the game.

There’s a lot of directions that I could go from here. Maybe it just needs more variety in the items and monsters? Maybe the Guardians need to work differently and be more ever-present. I almost certainly need to re-visit the other two lanes (which were more or less disabled in a patch as a bit of a stopgap). Maybe the player needs a fourth ability. Maybe the player also needs to get experience and level up.

This is probably only about half of the general “approaches” concepts that I have sitting in a Trello, ready to be worked on.

I’ve been, for a long time, a “moonshot game designer”. If you want to build something really different, something big, you can’t expect it to work right away. If you’re building a huge tower, you don’t want to start getting judgey about “how good a building this is” after you’ve laid down your first couple of bricks.

A piece of standard-issue game design wisdom is that “your game should be fun to play early on”. For a long time I’ve kind of resented this advice, because I think it pushes people towards conservative designs.

And my own experience with Auro wasn’t like that at all. With Auro, the game was garbage for at least the first two or three years. The game only became fun sometime in late 2012 or 2013 for the first time, and I had started the game in ’10. When we started, we didn’t even have the bumping mechanism(!). And it’s such a tight game that it really needed everything to come together, balance wise, and everything, for the vision to really *CLICK*, and happen. When it finally, finally came together, it was really strong, and really different. Auro had its flaws, but one thing I can say is: it really ended up being the thing that I had envisioned all those years I spent working on it. 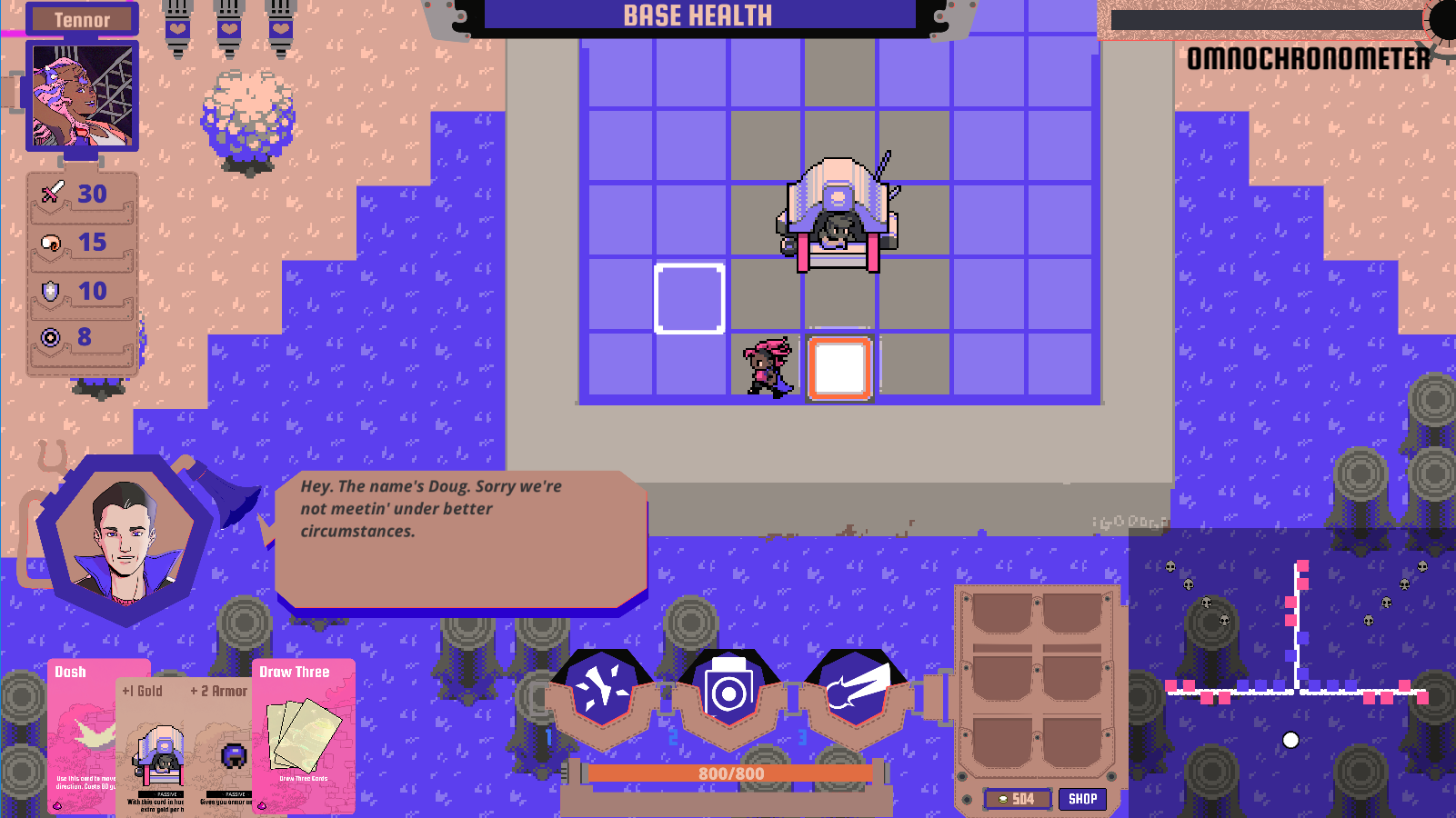 For awhile I was thinking, maybe I’m halfway there. I just need to iterate for another TWO OR THREE YEARS and then one day it’ll suddenly all CLICK, right? Maybe.

I had been feeling for a long time like ETO had just not found its “bumping”. After stepping away for a couple of months, I’ve come to the conclusion that the problem is more “ever-present” than that. Basically, I think the problem has been, all along, that this should never have been a turn-based game.

I mean, you could come to this conclusion using non-arcane, normal methods of videogame-thinkin’: the games that ETO are based on (really, MOBAs less than Rogue-likes) are real time, so it kinda makes sense that this should be real time, too.

But it also makes sense when you get into arcane, Keith-style game design thinky mode. This is kind of a “continuous” game. It’s not a tactical game, it’s not about “which specific tile you’re on”. It’s about where, in a general sense, you are. It’s not about “how many hit points you have”, it’s about “how much health you have”. Things in this game, as in MOBA games, tend to matter on a more continuous way.

Do I know that this game is going to be “fun” once I make it real time? No, I don’t. But I feel pretty confident that it will be significantly more fun in real time, even if that’s literally the only change we make. And that it would create a path forward for the design to go.

The thought has definitely occurred to me to just “move on”, entirely, from Escape the Omnochronom!. In the short term, that is what I’m doing. I have a few other projects that are going really well, some of which I’d started long ago, and some of which are new.

But I definitely don’t want to leave ETO in the state that it’s in now. ETO is the first Keith Burgun Game, and I wouldn’t be happy about it staying the way that it is. I worked too hard for too long on it to abandon it.

With that said, “transitioning to real time” is kinda a large amount of work. Or… well, I’m not sure how much work it would be. Maybe it’d go really smoothly and everything would be fine. But I will say that I’m a lot less comfortable working in real time, code-wise, so it could be tricky.

I think I need to get at least one of the other games I’m working on right now out the door, and then I can take a look at the problem again.

Another quick aside/lesson that I’d like to share: it’s probably a really bad idea to make a huge game like this all on your own. Some people can do it, but for a lot of people, it can be really rough, and even dangerous. I am much more interested in collaboration than I was five years ago. Moonshots are cool, but… probably don’t go them alone. (Edit: after writing this I proceeded to do the same thing all over again with Gem Wizards Tactics…)

I want to say thank you so much to my Patrons for helping to make this game a possibility, and also to those who have already purchased the game. This is a game with massive potential, and it’s one that I still believe in, so I really hope I’m able to have that realized, eventually.

I appreciate your patience. I’m gonna land this moonshot eventually, as I did with Auro, however long it takes me. I just need a little time to recuperate after a difficult couple of years.