Hey y’all! I’ve been working extremely hard this year on Spellstorm (among other projects) – so much so that I sort of forgot to write something about it here on my blog, I’ve realized! I did write this piece over at its BoardGameGeek page, so do check that out to begin with, if you haven’t already:

In any case, this game started out in late 2021 as a sequel to Dragon Bridge, my first card game. Over the last 10-11 months, and over 100 different numbered versions of the game, the game has evolved into… really, its own thing, and that’s why the title no longer reflects its Dragon Bridge origins. It’s a deckbuilder! But, as I talked about above, it’s a new KIND of deckbuilder, in a bunch of ways:

We’re gunning to do a Kickstarter for the game early next year. Spellstorm is a much bigger production, by the way, than Dragon Bridge, and I’ve got the great people at OtherStuff Games helping me organize everything to make sure the Kickstarter goes great, and so far they’ve been incredibly helpful for basically every aspect of the game.

The star of the show for this game is surely going to be the amazing art, which is by Christina Zhong. She’s really brought all these Gem Wizards characters to life – including two ALL NEW, never seen before characters – in an unprecedented way for that universe. I’ve also got a lot of design help from incredible game designers Brett Lowey and Pete Siecienski getting the game to where it is now. I’ve also gotten graphic design help from the amazing pro graphic designer Jenny Bee. So overall this is going to be one amazing looking, awesome playing game.

And one thing I do have to say about the “playing” part: I’m really proud of how *smooth* this game is to play. It only has 3 phases and one of those three phases is literally “draw a card”. It’s like, play a card, draw a card, resolve two gems. That’s all you do, every turn, and yet so much cool stuff happens as a result. It’s taken a LOT of development to get the game here; early on we had four or five phases. There’s been so much trial and error getting everything to be intuitive and feel right.

I think all that development is paying off, and now we have a good 4 or 5 months to get some fine tuning / balance stuff right, which feels pretty good to me. If you’re interested, we could use your feedback on the game before it’s too set in stone, so please come by the discord’s #spellstorm channel and ask about a playtest! We currently have a very nice Tabletop Simulator module with the rulebook and everything. 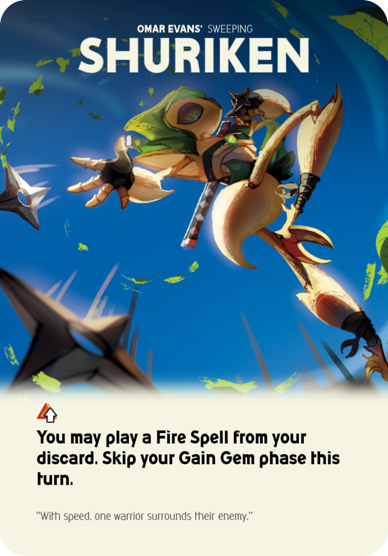 Thank you for reading, and make sure you’re signed up here to get a heads up when the game goes live.