The prospect is further complicated by the fact that once someone leaves the bridge with an item, any other items crumble into dust. So you’ll have to be sure that you’re the one to escape before someone else does.

Oh, and also: don’t get eaten by the Dragon, either.

Dragon Bridge is a quick, competitive 2-player card game. Players each control a wizard, moving up and down an 18×1 grid, casting spells, gaining magic items and luring the dragon to one side or another. Players win either by knocking the other player into the Dragon, or by escaping the Dragon with at least 1 item.

The first available base version of Dragon Bridge will feature four playable characters, and more will become available later on. 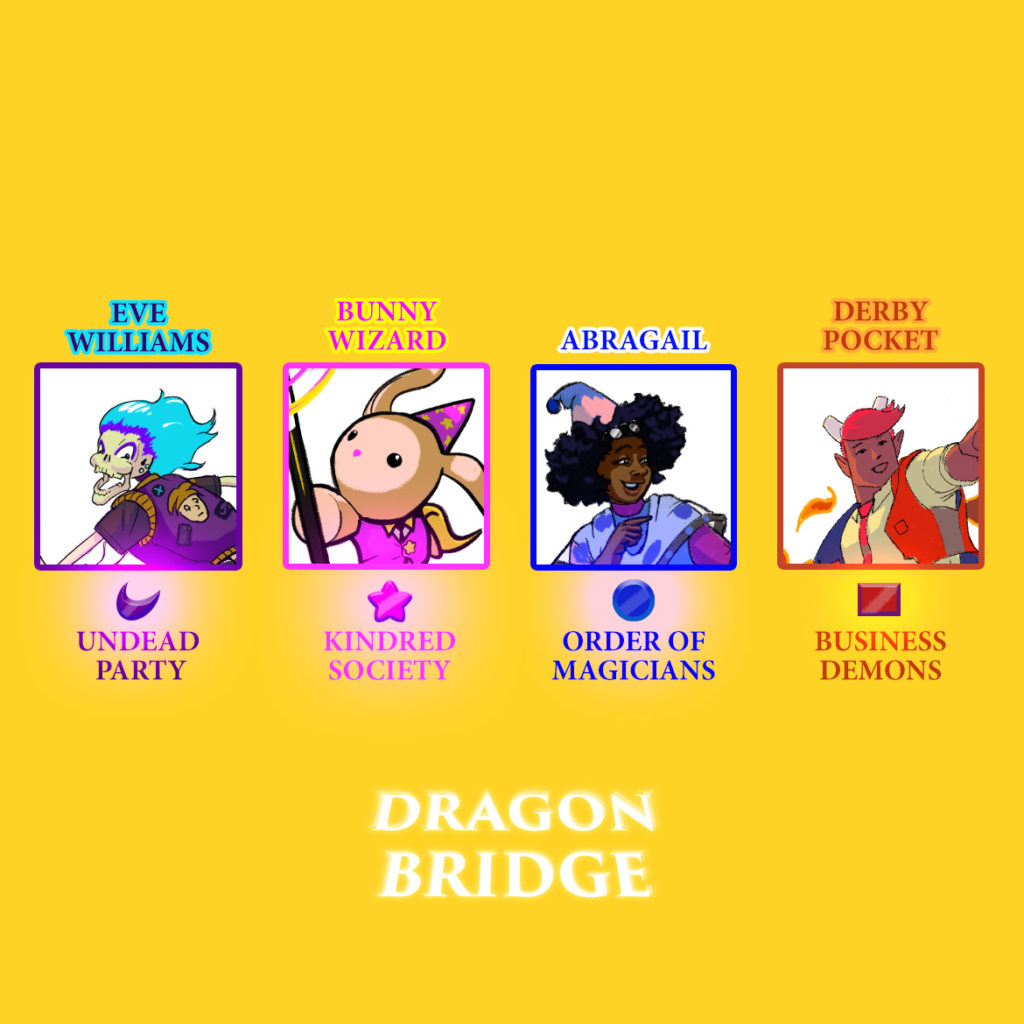 EVE WILLIAMS (Undead Party) – A revolutionary Skelly born into a world of undeads who only want to party.

ABRAGAIL (Order of Magicians) – A teacher who’s kinda fed up with the rigidity of OoM society and culture.

DERBY POCKET (Business Demons) – A young go-getter Demon with an infectious smile and an enchanted yardstick.

The game takes place on an 18×1 tile grid, with a Dragon on one end. You and the opponent each play a card from your hand each turn, either moving yourself (usually) away from the Dragon or knocking the opponent (usually) toward the Dragon. I say “usually” because the objective is either to escape (to reach the non-Dragon end) OR to knock the opponent off the Dragon-end. However, I also say “usually” because every so often, the dragon actually switches the side that he’s on!

Action cards often have “Dragon Orbs” on them, and when 7 or more Dragon Orbs have been played, the dragon switches sides, gaining a new power. Some cards allow you to reduce the number of Dragon Orbs that are down, delaying the Dragon switch. Throughout the match, players will also gain magic items that can help give them an edge.You’ll have to play strategically and think tactically to come out on top.

Dragon Bridge is a game for 2 players that takes between 15-30 minutes to play.

I’ll have more updates on the game soon, but make sure to sign up for my mailing list to stay on top of what’s going on with this game!