My new game Dragon Bridge takes place in a universe called Gem Wizards. I was also working on two other, much bigger games (which I put a hold on to finish Dragon Bridge) in this universe:  one of which is a 4X Strategy game (which I may now never finish after hearing Soren Johnson talk about making a 4X on this podcast episode), and another much bigger card game for 2-4 players. I also have yet another very small card game that will be in the Gem Wizards universe that I hope to be able to make some announcements on in the winter.

While creating (or half-creating) all of these games, I’ve also been working a lot on the lore. What kind of a world does this take place in? I have a lot of things I want in the universe and reasons why I want them, but we’ll get into that in the next episode. For now, let’s talk about what this universe is. I still have a lot of content to fill this universe out. But it’s the kind of universe I feel like I could make games in for a life time. So at the very least, it’s a world *I* can live in, as a designer.

Before I go into the deets, I should mention that very little of this stuff is in Dragon Bridge, a simple 35-card battle game. Future games in the universe will express a lot more of this kind of stuff. Anyway, let’s get into what I’ve got so far.

It’s a world kind of like our own – different regions and climates and whatnot. Many of the games will take place in or the year 2000, which doesn’t mean much maybe, other than that their calendar started 2000 years ago. But they have a really different history than us. Their technology is maybe similarly advanced but in really different ways, and most of the “high tech” stuff is kind of owned by one small island faction called the Alcove Prefecture. The other factions have technology similar to the technology we had in the middle ages up to maybe about the Renaissance. So, overall, it feels pretty normal “high fantasy”, with suddenly there’s some techy stuff when the Alcove shows up. So nothing too weird here, I think.

What they really did better than us was on a more social level. They’ve definitely had wars, big ones, but fewer than we’ve had on our Earth. And in their year 2000, there hasn’t been a major military conflict in 20-30 years at this point. And, of course, they have magic. The magic is based on stones – six different gems, which appeared in different parts of the world, which explains why some of the factions have “green”-gem spells, some have red, and so on.

There’s two major large continents. The eastern one (“The Mainland”) has three major factions on it: The Order of Magicians, The Magic-Bug People and The Undead Party in the far northeast. South of this island is a small island that is the home of the Alcove Prefecture (white).

The western continent (“Terre de Pomme”) is similarly large, and for a very long time it was inhabited almost entirely by The Potatoes, and more recently has become the home to The Business Demons. To the south of this continent is the home of The Kindred Society. There are other smaller factions, and within each faction there are sub-factions, but this is a start. Now let’s talk about who all these weirdos are.

The Factions (part one!)

There aren’t really “nations” in this world – each faction has its own arrangements that ties it together in some way or another, and some are more or less unified. Let’s get into ’em.

The Order of Magicians

“People are like water: only useful when contained.” – Gorby Borbs-Hennarhgb, Author and Playwright

In some ways, The Order of Magicians the most “terrestrial” or Earth-like faction (along with the Business Demons). As their name suggests, they’re super interested in “order”. Their gem shape is a circle, which represents a balanced, solid and stable shape. They’re also super into order because, a few hundred years ago, they were this huge empire, spread all over the world, and now they’re a tiny fraction of what they once were, for a number of reasons. So being all serious about maintaining order is a way for them to kind of feel like they have authority and significance that they once had. Given their centuries-long empire status, some of their cities and universities are still the most popular and well known destinations for Wizards everywhere. They were originally a Human faction and still are largely Human, but recently a large population of Magic Bug People have made this their home as well. They get along least with the Undead Party, both because of a history of wars with them, and because the Undeads are (as we’ll see) all about partying (kind of the opposite of order). 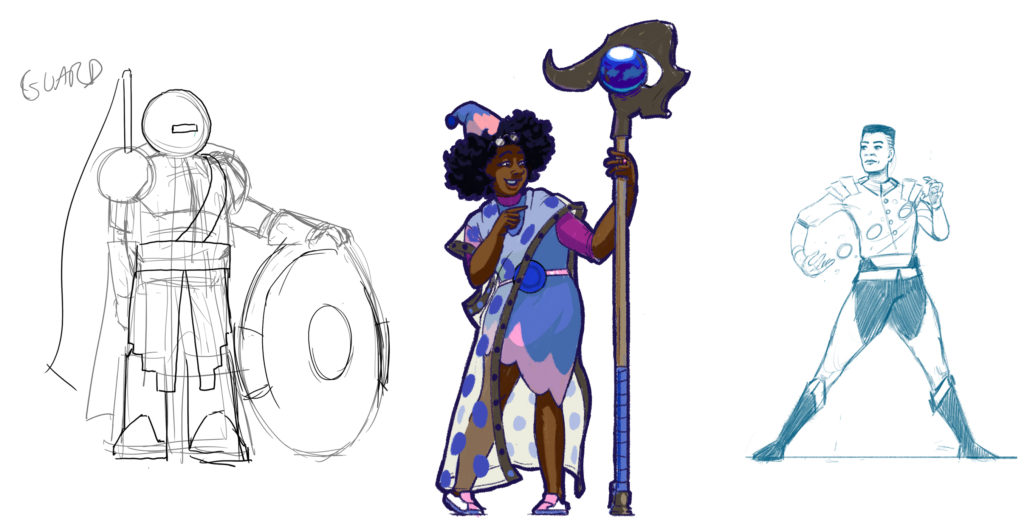 “Okay, so this slide is all about the moral and ethical justifications for Operation Fireball. Here, you can see our market projections for 2010.” – Bill Ionaires, CEO of Ionaires Oil & Tea Corporation

The Business Demons have lived in the Underworld for thousands of years, totally undetected by humans. They have their own rich history, basically on a planet inside our own planet with lakes and oceans of fire. About fifty years before present day (around 1950), they emerged in great number from a crack in the earth. Since that time, we have learned that the Business Demons who came to the surface were of a very particular ideology: these were the most profit-driven, hyper-capitalist people of their species. as many other Demonic scholars and politicians who stayed in the Underworld have been very vocal about. When the Demons emerged in souther Pomme de Terre, a war broke out between them and the Potatoes. A cease fire soon was instated (thanks to help from the nearby Kindred Society), but the trouble between the Business Demons and the Potatoes didn’t stop there. To this day, the Business Demons continue to deforest large areas of Pomme de Terre and use exploitative labor practices (they’re big on unpaid internships). 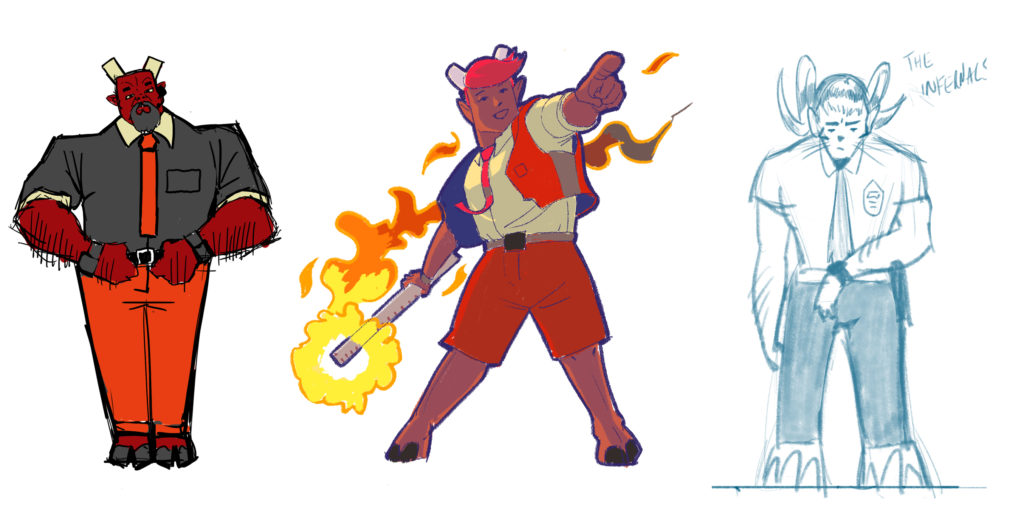 Strategically speaking: They’re rushdown, scorched earth, but also have some “predatory capital” mechanics for econ (like predatory loans and things like that). Fire-themed spells.

“Humans of the Mainland act as though they respect us, but they do not consider vegetation ‘life’. They live with a tree in their yard for a lifetime, and still have no concept of this tree as anything other than decoration, or a resource. It’s… seriously messed up.” – Garland Stevenson, Starchmage of the Black Isle Tribe

For the longest time, the Potatoes lived a pretty peaceful life in an agrarian society, on a large isolated continent that was all their own. Organized into smaller tribes, they occasionally had battles over territory over the years, but they have unified entirely in response to the appearance of the Business Demons. Seen by a lot of the world as simple and uncomplicated, the potatoes actually have a network of inter-connected religious systems, largely based around farming and an interesting and sophisticated narrative system that explains much about the dynamics of vegetable growth, soil fertility, weather patterns and such. Societies around the world have come to Pomme de Terre to speak with Starchmages and Magistarches to observe aspects of their rituals and practices that lead to such successful and sustainable crop yields. Now, they are locked in a political and economic struggle against the Business Demons, who use legal and semi-legal means of taking large areas of farmland and abusing it, often leaving it desertified or converted into cheap condominium settlements. 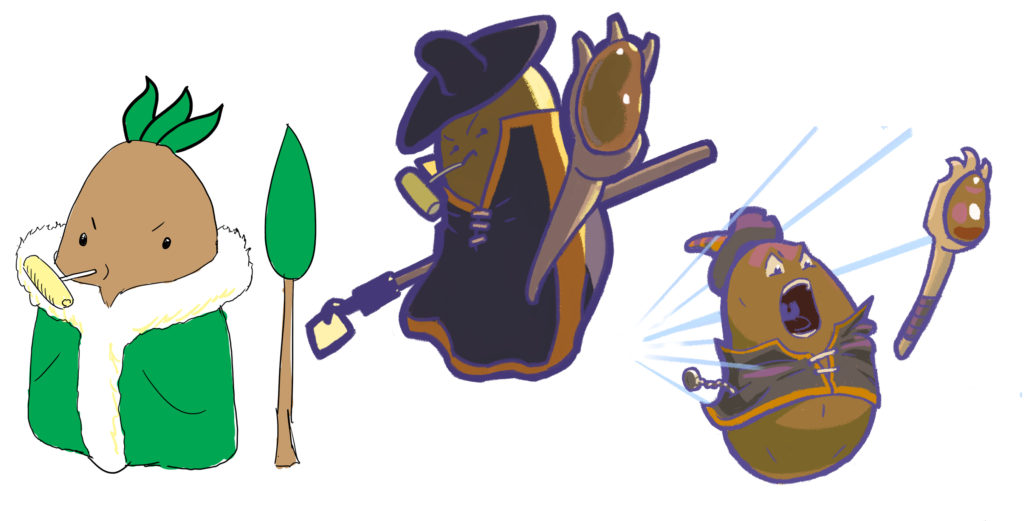 Strategically speaking: They’re defense/econ. They’re “hearty”, have a lot of health and ability to grow. Nature/vegetation themed spells, but also poison (did you know potatoes are related to nightshade?). 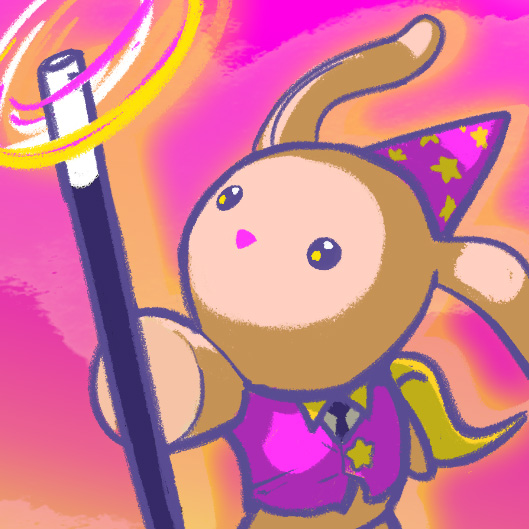 These are just three of the seven factions. I want to also give you a quick preview about the Kindred Society, a faction made up of many species, but most populated by a race of stuffed animal bunnies like Bunny Wizard above. Here’s a piece of the lore text about them from Dragon Bridge:

Later on I’ll write an article about the Kindred Society, the Undead Party and the mysterious Alcove Prefecture. But next up is an article about why I want to make this fantasy world, as opposed to some other fantasy world. Thanks for reading, and if you want more make sure to sign up for my new mailing list.