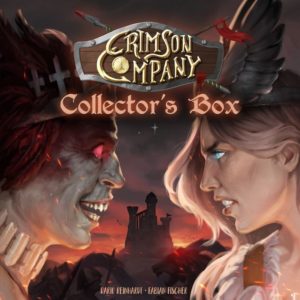 On today’s show, we have an interview with designer and theorist Fabian Fischer. Fabian is the designer behind Crimson Company, which is now running its fourth Kickstarter, which is currently doing incredibly well—at the time of this writing, it has over $33,000 pledged (and they were only asking or $11,000)! On the show, we discuss the difference between designing for digital vs physical, what game design theory needs to go forward, some thoughts about pre-game decisions, and a bunch more. Fabian (who folks over at our Discord may know as Nachtfischer) writes articles on game design theory, which you should absolutely check out, like this article on Insta-Tournaments, or this article on pre-game decisions (which we also talk about on the show). He also compiles a bunch of game design theory together into a “game design news” series he does called Ludomedia. He also does really cool smaller digital games which you should definitely check out here on his itch.io page. As you can see, this guy does not mess around! I am glad we got him on the show, and I think the conversation went really well, as expected.

Enjoy! And don’t forget to check out Fabian’s Kickstarter, while it’s still live!

If you do enjoy the show, consider becoming a Patron at www.patreon.com/keithburgun. When you do, you’ll enjoy a bunch of benefits, like special Patron-only content, Discord roles, and bi-weekly builds of Gem Wizards Tactics!