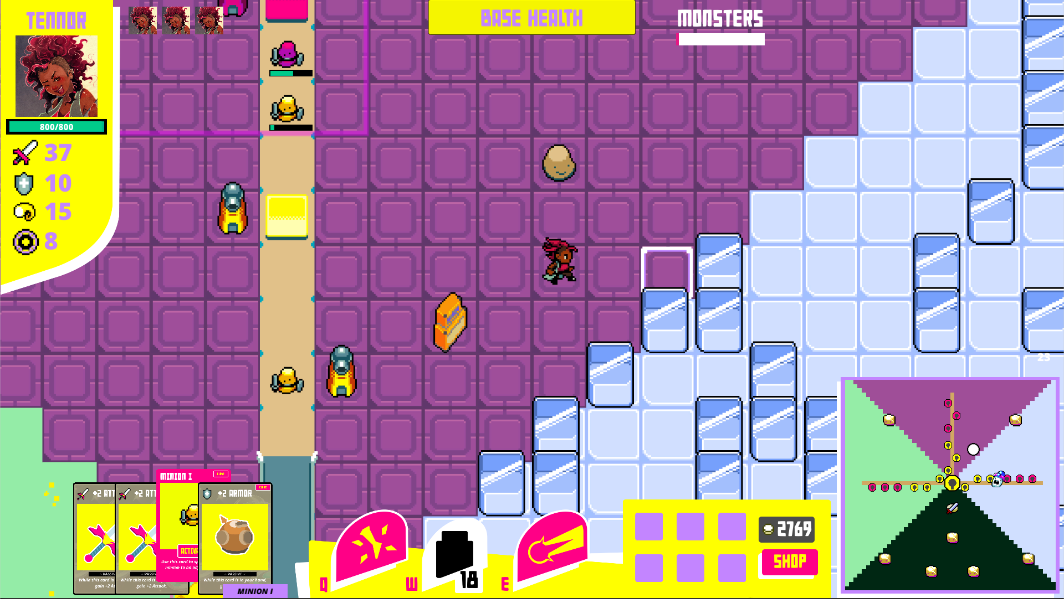 Since Push the Lane entered this latest phase back in mid-2017 (basically after the failed Kickstarter version, which was much more puzzle-game-like), it has become much more videogamey. By that, I mean, it has focused a lot more on fighting, monsters, items, special abilities, moving around a big map and such. I have been thinking of it more like “a Rogue-like DotA” recently; a turn-based, single player League of Legends.

With that thought, I always kind of had it in the corner of my mind somewhere that it would be pretty cool if the game had “loot” somehow. My general feeling and belief about loot has been, for years, that it has really no place in strategy games. But maybe there’s a way? First, let’s define the term.

I think most of the time the word “loot” is used, it refers to randomly dropping items. For me, the classic version of “loot” is item drops in Diablo, or a Rogue-like. More recently, it’s popular to have “loot crates” in games like Overwatch, which give the player some random metagame items, such as skins.

I think Push the Lane will probably have both. The second kind – the Overwatch kind – is pretty easy to implement into a strategy game without damaging it too much, as long as you make sure to only let the player unlock aesthetic stuff or sometimes side-grades. But the first kind, the Diablo kind, is a lot harder to implement into strategy games.

The quickest way I can express why it’s hard to put loot of this kind into strategy games is to say that it’s simply unfair. In a two-player game, it’s pretty obvious that I shouldn’t win a match against you because I happened to get better item drops than you did.

In a single player game, it might be less obvious why it’s a problem that I won match 1 because of a crazy good item drop and lost match 2 because of the lack of good drops. You might feel like, well, so what? Who cares? Worst case scenario, you’re just cheating the computer or something, right?

The problem might not be too much of a problem while you’re climbing the ranks (see this article to read about Single Player Elo systems). But once you get to your skill level’s appropriate rank – once your win rate has started to level out to somewhere near 50% – that’s when stuff like random drops starts to become a problem. When the game is really hard, when you’re striving to win in a very difficult atmosphere, stuff like random drops can really throw that off.

This isn’t as much in something like a high-score system Rogue-like game, because there isn’t a binary win/loss condition (or at least, that’s not usually what players are playing for in such games). In a Rogue-like, maybe you get a bunch more loot one game, and so you end up with a bigger score. It’s less significant, because it’s not really clear what you are trying to do goal-wise anyway. With a win/loss based game like PTL, you’re clearly going for a win, so if you get the win because of item drops, that’s a problem.

The inclination, then, is to basically make them less random in order to make it more “fair” (or to use a better term, make it more uniform). That means a smaller variety of what can drop, and less surprise about when it drops. So a hard other-end-of-the spectrum would be to make monsters always drop the same item, or maybe a very small pool of items that don’t vary much in value at all.

That is almost certainly something that would work in Push the Lane – but would it be loot? Also, do I really care if it’s loot or not? And if so, why?

One of the things that has been missing from the game so far is new, meaningful, big and chunky information coming into the game after the start. Most of the randomness in current PTL happens at the start of the match: which zones you have, where the doodads are, and which items are available in the shop (as well as item costs). In terms of mid-match randomness, the only things that really happen are when the bosses appear (which is significant) and when monsters and orbs appear (a lot less significant). We need more.

I also think that Push the Lane being kind of a strange game, we could use as many hooks as possible to pull players in. I think one of the ways that Rogue-likes are able to do that is by using this sort of operant conditioning random Skinner box thing. Players play, to some extent, hoping that they will get some crazy payout. Even Civilization kind of uses this to some extent: when I start new matches, part of the excitement is in grabbing all the “tribal villages” (very offensive) – maybe this match I’ll get a free Scout super early on, or some clutch technology out of it.

So what I’ve been struggling with is how to create a system that gives the player, overall, somewhat uniform value, while still feeling random enough to feel like loot. I’ve gone through a lot of different formulas and weird ways of doing it.

My plan now is to let it be a little bit wild, within some parameters, and hope that because the matches are pretty long and because there are multiple axes on which random events are happening, there will be enough going on so that the match isn’t won or lost based on what loot you have.

I think something that I’m grappling with is that I’m no longer making a tactics game, like I did with Auro. I’m now making a strategy game, and it’s a decently big strategy game. There’s a lot going on. So while getting some random item in Auro could probably have thrown the whole match out of whack, in Push the Lane I think it might get somewhat absorbed.

Also helping this is the fact that you don’t really want more than a certain amount of most stats, and you also kind of want some of all of the stats. You can sell items (at a loss), so there might be a few situations where you do get a lot of really good items, but in order to cover some bases you’re missing (like, let’s say you get a few really good offensive items, but no defensive ones), you might have to sell something off in order to get some defense.

Here’s some details: there are a few treasure chests around the map, including some in the Forest. These each contain some random items (low to medium value). Also, most Guardian monsters (unlocked by capturing capture points on the lanes) drop a low to medium value item. Finally, the two “lane-end chests” at the end of the left and right lanes drop a medium to high value item.

I have some math and some averages that tell me how much general value these should drop. But beyond that, I also probably will put in some “caps” at some point: if the player has already achieved, say, 10,000 gold worth of value this match, the game can go into a “very lame loot mode” where things either drop nothing or very little. We can do the same on the other end – if the game hasn’t given you much in the first 200 turns, we can make sure the next thing it drops is pretty good.

It’s possible that even without measures like that, the game could work out and be okay. But I think if we have those in place, it will ensure that stuff can only get so out of whack. And there’s so much the player can do in terms of strategy and just general input that I think their skill should be able to overcome whatever comes their way. That’s another problem, which I have to remember, is that a lot of these unfair loot games (Rogue-likes come to mind), the skill cap is actually pretty low. Other than knowing what everything does, there isn’t a lot of strategic skill you can gain at playing a Rogue-like game (even if there’s arguably a good amount of tactical skill there).

Anyway, it’s back to the programming mines for me now. Hope you enjoyed this, and please let me know if you have any thoughts on what I’m doing with loot in this game. See you soon!

If you enjoyed this article, consider becoming my Patron at Patreon.com!