I’ve been working on this game since late 2015. It started as an abstract dragging-stuff mobile game like Threes, then become more of a single player turn-based League of Legends, and now has become a strategy/tactics game that doesn’t resemble anything in particular. 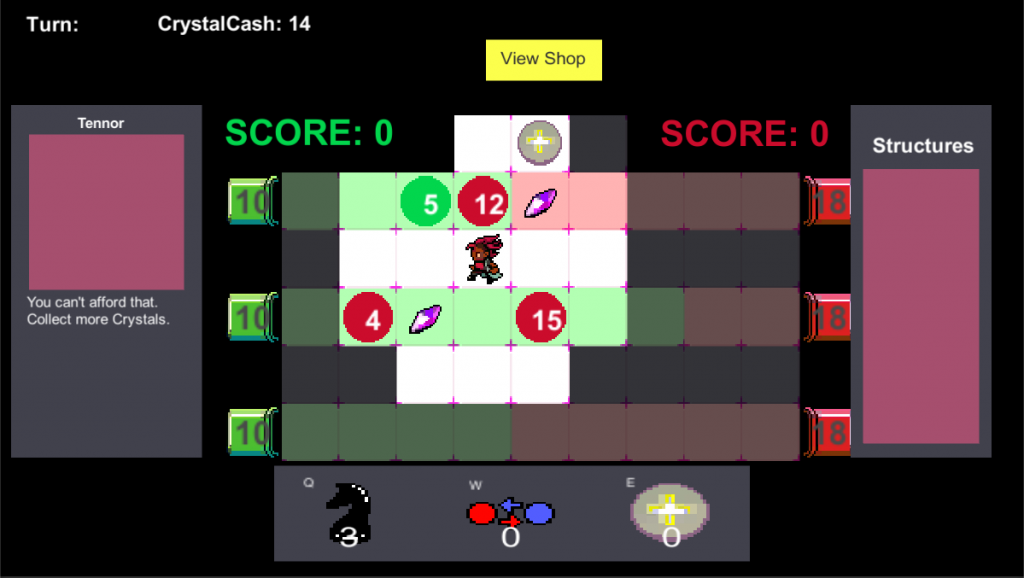 Above: an actual alpha screenshot. Almost all temporary art, but it’s playable.

The setting is a world kinda like our own, but about 30-50 years into the future. None of the horrible doomsday scenarios have happened. Technology has advanced at a somewhat subdued rate, so the world isn’t that crazy different. One of the biggest changes it that the world is overall a lot less culturally misanthropic and much more inclusive. That’s sort of the angle I’m going with with this game. Like a videogame theme, but less misanthropic, more inclusive.

The story involves a cast of characters who all come from different places but who have one thing in common: they’re good at what they do, but they haven’t been able to achieve their dreams in life, for whatever reason. They all fly out to a space station where the TV show is filmed, make friends, have drama, and ultimately learn that their idea of “following their dreams” was misguided in the first place.

This idea that with hard work and a little luck, a person has the opportunity to become successful doing what they love was never how the world really worked.

The way the world works is much better than that.

The characters all have different occupations, skills and hobbies which determine their abilities in the Push the Lane! competition event. Tennor, seen above and on the title screen, is a rock guitarist in a band. Other characters are fashion designers, carpenters, computer scientists, teachers, philosophers, and so on.

Thematically, I’m prioritizing representation, in terms of having a lot of different kinds of people in terms of race, gender identity, age, occupation, body type, and so on.

I suspect that one of the many reasons so many games don’t do a great job on that kind of representation is that they are created, largely, by similar kinds of people (basically, white, western, cishet males). So one of the things that I wanted to do with this project was involve someone who didn’t come from the same place that I did.

I had a rough idea of what I was looking for, but I also wanted to find something that challenged me. I didn’t want something that looked like the kinds of stuff I was used to. I searched around for awhile before I found my artist, Fariza Dzatalin. I was really moved by a couple of her pieces in particular. They feel non-misanthropic, and they also feel like something that someone with my background couldn’t, or wouldn’t make.

You can check out Fariza’s DeviantArt page here. I’m really happy with the work she has produced for this project so far. Here are a couple other characters from Push the Lane!, which will give you some sense of what I mean about representation and more of a sense of Fariza’s art style for this game.

Here’s the latest gameplay, although it keeps on changing. Gems are moving across the screen and crashing into each other in the middle. If a gem makes it all the way to the other side, that lane gets “pushed” in that direction. If that lane gets pushed all the way and a gem makes it over, that team scores a point. The objective is to have your team score 10 points before the opposing team does.

To do this, you have to run around the map, using abilities that push and pull and swap and rotate gems. You also have to collect Crystal Cash, dropped by crashed gems, and bring it back to the base. Here, you can buy Buildings, which you can deploy on the map to create long-term bonuses. Think of them as kind of like buying items in League of Legends, but way more tactical.

Overall, it’s a turn-based tactical strategy game. You can play it in Story Mode to follow the story and learn about the game, or play in the Tournament, where you can pursue better and better ranks over time. Shooting to have about a dozen characters.

If you like what you hear, consider Contributing to my Patreon, which is currently the only way I make back some of the time and money I spend on making games, podcasts, articles and videos.

I really look forward to hearing what everyone thinks of this project so far. Thanks for reading!