Today I’d like to talk about the five characters that come with the base game of Dragon Bridge, my new upcoming two-player card game. With the base five characters, I tried to provide a good mix of different, varied characters, both in terms of how they look/their style, but also mechanically. Some characters are a little more defensive, some are a little bit better at rushing down, and some get a mid-game boost (I call this “econ”—see this article for more on that kinda stuff). I also wanted to have the base characters be a little on the simpler/easier to use side. The characters that come with the first expansion, “A Bridge-Hacking Expansion”, will be a bit more complicated overall.

So far, I’m quite happy with the characters as they are. We are still doing balance tweaks, so I probably won’t get too specific with the actual textual abilities on each character card, which may change a lot in the future. Instead, I’d like to talk about who these characters are, and what I’d like them to feel like to play. 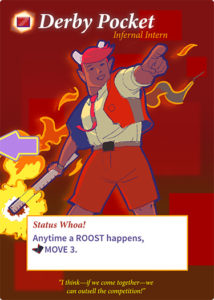 So Derby works for the Business Demons, which are like a hyper-capitalist corporation that has basically become its own pseudo-nation on the surface of the planet, after bursting forth from the magma some fifty years ago. The Business Demons, lead by CEO Bill Ionaires, have been pretty ruthless in their expansion and exploitation of the Potatoes’ home in Terre de Pomme.

But Derby is not necessarily driven by the same expansionist corporate ideologies that the Business Demons are driven by. Derby is primarily just a team-player who wants to do a good job. They’re competitive and they move fast when given orders. They’re also young and optimistic, and since they mean well, they sort of assume that everyone else must, too. Therefore, they aren’t terribly conscientious about, or even aware of, what some of the people in this organization have been up to.

MECHANICS: Because of the “business” aspect, I wanted Derby to have a power that feels a little bit spreadsheet/technicality oriented, so it’s good if it interacts with the Dragon Orbs system more than the grid itself. Also I want there to be this feeling of just like, relentless energy, or inevitability with them, like they’re young and strong and coming at you and there’s just nothing you can do to stop ’em. I think Derby would be good at any stage in the game, but I could see a rush or defensive strategies going particularly well. 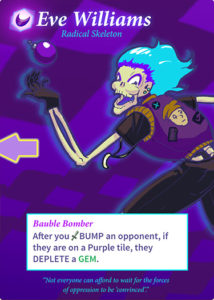 Eve is a revolutionary noise-maker, both in the sense that she’s often out in the streets protesting and causing civil unrest over one thing or another, and also because her band “Eighteen Post-Out” is a noise music group. As a result of past conflicts with the Order of Magicians, many of the Skeleton people have taken to an “always party” philosophy, where they’re constantly playing dance music and partying. Eve is not a fan. She feels that there’s too much injustice in the world to be partying all the, and also she feels that she hates dance music.

She’s a known “party-pooper” in that she’ll often attend some of the largest Skeleton party events in Mainland and throw her “Doom Baubles”, as she calls them, into the crowd. They break on skeleton heads, and while the broken glass of the bauble doesn’t hurt skeletons (they’re made from 100% bone, you see), the baubles are filled with a very special magic chemical of her own concoction. This chemical, in gas form, has no odor of its own and is completely harmless other than, if you have inhaled it recently, soda is completely flavorless to you. Without tasty soda, parties, concerts, balls and other events quickly disperse.

MECHANICS: Basically, I knew I wanted Eve to be “disruptive” in some way. Also, because of her Bauble artwork, I thought it should be something “offensive” that she does to you (which, also plays into the disruptive angle). This way she can be a good annoying defensive player or a scary rushdown character. 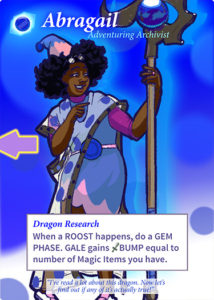 When Abragail was a professor at the University of Magic, she was famous for her Intro to Ice Powers and Water Bending IV classes. But after about a decade, she simply got fed up with some of the ways that the administration—and the Order, more generally—does things. Their obsession with a linear and narrow vision of “progress” has blinded them to so many of the things which are possible in magic, she thinks. While attending conferences on the Harraway Archipelago or on Bunny Island, she has met so many incredible wizards from so many different backgrounds, and while the textbooks she was required to assign teach students that all of these other societies’ ideas about magic are messy, haphazard and without any core philosophy, she sees something different.

Now, she travels the globe searching for anyone who can teach her new ways of thinking about magic. And she hopes that someday, she can find a way to communicate some of what she learns to some of her friends and colleagues back home.

MECHANICS: Because of her adventuring/academic background, I thought it would be cool if she sort of gained “artifacts” faster than other characters, and got more out of them when she did. I think she’s going to be like a mid/late game “econ” character, who starts off not necessarily as strong as some other characters but who has more of an “engine” she can build up. 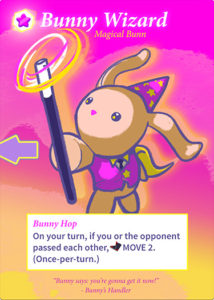 Bunny Wizard is kind of a jack of all trades: he loves to draw, play the guitar, and create elaborate puppet shows for his friends on Sunrise Island, a small island off the coast of Bunny Island, where he lives. Bunny is very kind, and sometimes does traveling around the world to try and make people feel better when bad things have happened, often by playing them songs or drawing them pictures. He attends magic competitions such as the Dragon Bridge games not to win necessarily, but just for fun, and also to try and help everyone keep their spirits up, no matter what happens.

Stuffed animals cannot speak verbally, but when they need to communicate with non-Stuffies, they usually do so through a “handler”; often a human or potato with whom they have a deep emotional connection. Bunny’s handler is a Potato private detective named Greo Hand who delivers bunny’s thoughts in a deep, raspy, starchy Potato voice. Together they have a lot of fun going to tournaments and making friends. Someday, Bunny wants to write an album of songs about all the cool magic spells he knows.

MECHANICS: I guess because of Bunny’s cuteness/child-like-ness, I thought it would make sense if Bunny’s power was very simple. Also, it definitely makes sense that his power would be more about moving around or something else besides attacking the other player, given that he’s all nice and such. As it is right now, his ability could be good for a rushdown strategy, but I also think he’s probably adaptable in many situations, as long as he doesn’t get too far away from the other player (which also works in that he’s like this cute little bunny who wants to be near someone, similar to his handler). 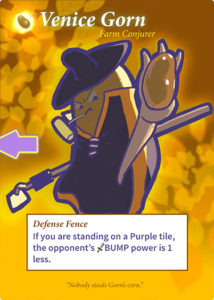 Venice is a grizzled, angry and tired old Potato, but also arguably the most powerful wizard in all of Terre de Pomme. All Potato farmers use magic, largely earth and nature magic based on the Brown Gem, in helping their crops to grow and to ward off pests and other threats. And Venice was one of the best at this, largely because he had to be to survive a massive killer mutant weed infestation that started in the 70s. Many farms were completely overtaken by this weed, whose origins were mysterious and still to this day unknown. But Gorn’s farm survived, thanks to numerous magical innovations by Venice and his wife, Andromeda Robin.

In the 1980’s, Venice’s farm came under attack once more, this time in a series of invasions, lawsuits, tresspassings and sabotage on the part of the Business Demons. He continues the fight to this day, but he has begun struggling financially, so now in addition to physically protecting his farm, he occasionally will travel overseas to compete in tournaments such as Dragon Bridge Games, in the hopes that he can use his incredible magic prowess to win fabulous prizes, which he can then trade for legal representation.

MECHANICS: It was pretty obvious to me that this should be the “defensive” guy. I mean, look at his face. But the concern with defense, especially in a tiny game like this one, is that you really, really want to be careful about drawing the game out too long. Several versions of this character’s power caused matches to basically go on forever, so that’s something I really needed to keep an eye on.

That’s about it for now! Thank you for reading, and keep an eye out for a new article next week about Dragon Bridge. Also, don’t forget that you can sign up for our mailing list HERE.