A few weeks ago we ran the first KBGames game-jam and it went SO WELL! All told, we got 14 submissions, and they’re all super awesome! 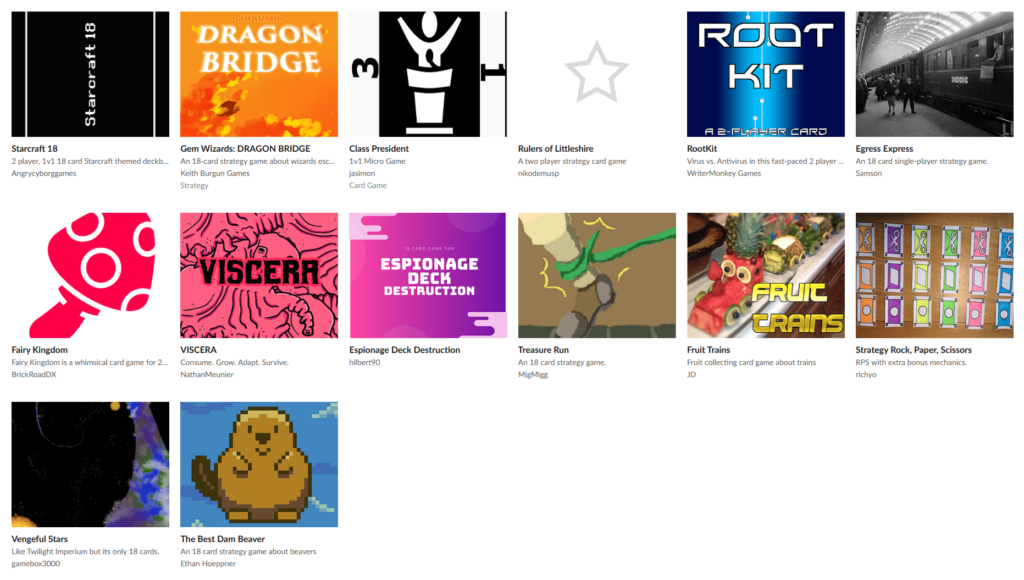 A few of these are getting made into more serious productions, including my own Dragon Bridge which I’ll be writing about soon. But today I wanted to share with you all a bunch of interviews that the entrants made. You can read the FULL LIST of them here, and I really encourage you to do so because there’s a ton of cool game dev stuff in there. Here’s a few excerpts that stood out to me:

I was really impressed with Outpost18’s ability to distill Magic the Gathering style play down into such a small package. I had tried doing so myself before with 100 cards and failed miserably. With this I still wanted to do something ambitious and Twilight Imperium is notorious for being The BIG Game with lots and lots of things and rules. So Vengeful Stars is my attempt at that.

I spent Tuesday-Friday faffing about in the design cave and made the art and rulebook over the last three days. I started the design trying to think of how I could fit territory and money into the game, trying to cram as many little systems as I could into the tiny package. This is where I got the idea of ripping up the cards to act as tokens I intended to use as currency and tokens to move through space. After discussing the idea with the Discord consensus was that this was against the spirit of the jam.

We’ve started everything by agreeing upon some designing principles. We wanted it to be quick, versatile, simple to understand but with things to be learned, strategic without being ‘solvable’ and casual without being ‘dumb’. These were the five goals that guided us during the development cycle.

The first fundamental gameplay aspect decided was the core mechanic: the two condition cards (which eventually became day/night and hot/cold). It was the solution we’ve came up to in regards to how we could make the game strategic and dynamic without using too many cards nor making it too complex for casual players. After that we’ve came with idea for seven cards: one neutral, four that would be conditionaly tied to the first two cards and two that would change the current active condition. So then, already in day one, we were testing our 9-card game. It was not enough to have a proper game, but we could already sense the ‘gamefeel’ and  testing match ups between different cards under different conditions felt fun in a way that seemed like we had more then 9 cards. After that we developed the remaining nine cards (including two special cards because we wanted to have something that felt like a higher layer of gameplay to please less casual players) and tweaked the numbers until it felt somewhat balanced and fair.

How do you think it turned out?

I don’t think my game turned out very well. Approachability was an important design goal – the whole idea of keeping the card set small surely comes with a desire for something non-daunting and easy to pick up. But by opting for abstract, themeless mechanics my submission feels a bit like meaninglessly pushing cards around the table.

On the flipside of that I was stupidly pleased with the look of the abstract, themeless cards! Not being an artist I decided to go with just colours and shapes like Uno cards or something.

I also like the mechanic of using repeated little RPS “fights” between the players to supply some ongoing randomness, even though I can see it has questionable knock-on effects on other parts of the game. Having to use such a small set of components is great for being able to see when adding one mechanic squeezes something else out on the other side.

For card placement to be an interesting mechanic cards should affect nearby cards, and with only 18 cards all cards need to have multiple functions to give enough possible interactions and combinations. I chose to go for a model with cards granting one of three different resources (gold, food or knowledge) depending a condition, and also being of one of three kinds of cards (people, buildings, land). This makes the cards not only score on their own but also affect the scoring of nearby cards.

Now to give players more strategic choice and to have hidden information and also to feel more like a card game, players get to put cards in their hand. Again, 18 cards is not a lot so you cannot have too many. I chose to go with a combination of a 3 card hand and 3 cards in a common pool. This gives a total of 6 cards to choose from, and still have an initial remaining deck of 9 cards. It also has the added complexity that you see three of the cards your opponent gets to choose from next and may pick one defensively.

A lot of the responses were really great, and you can read them all in-full here. You can also of course check out the games and provide feedback over at itch.io! We’ll definitely do another thing like this at some point soon. Thank you SO MUCH to everyone who submitted: Angrycyborggames, jasimon, nikodemusp, writermonkey games, samson, BrickRoadDX, NathanMeunier, hilbert90, MigMigg, JD, richyo, gamebox3000, Ethan Hoeppner and everyone else who signed up but didn’t have time to submit something! AWESOME WORK EVERYONE!!!

As always thanks to my Patrons for giving me the space to help organize these kinds of events.