Editor’s Note: One of our most active Auro beta testers, Fabian Fischer (aka “Nachtfischer”), had written this great piece for his German-language site.  We’ve been talking a lot about story in games on our forum, and I decided it would be great if Fabian could translate and update this article for my site, and that’s just what he did.  I think it pretty much nails why authored story and interactivity don’t go well together.  Enjoy!

A while back, Mr. Burgun wrote about this issue. Nevertheless, since there is still a frequent and passionate debate on the matter, so I thought it would not hurt to approach it from a slightly different point of view and throw some new arguments into the mix.

During the last few decades of digital gaming, we’ve gotten used to understanding games primarily as a storytelling medium. Developers tried really hard to push games into the same category as movies. Sometimes AAA games are even referred to as “blockbuster games” and most titles from the recently rising world of indie games also advertise their “compelling story” up-front. Below I will present some arguments, some “food for thought”, on why this marriage of stories and games was probably a pretty bad idea to begin with.

The following was the main point of Mr. Burgun’s article linked above and illustrates the inherent conflict of games and stories in the most fundamental way: A story by its very nature is linear. A game as a machine enforcing difficult decision-making is everything but linear. The two forms dramatically oppose each other, even when looked at from a very low-level, i.e. mechanical, point of view.

Just like games, stories are incredibly complex and fragile constructs. And just as a game has a core mechanic, which ideally is supported by every single mechanism in the game, a story also embodies a core, called the “controlling idea”. In a strong and compelling story, every part of it is linked to this idea. A means to achieve this is the heavy use of context: When presenting a linear sequence of events, the author can completely rely on what the audience has already experienced at any given moment. On top of that, because it is his story, he also has complete certainty about any future events. These facts are heavily taken advantage of in traditional storytelling mediums such as movies and novels. In these mediums, the author, or rather the storyteller, is able to use the context very efficiently at all times. At any given moment, it is perfectly clear which sentences of a novel the story’s recipient has read before, or which pictures of a movie were seen before. Whereas in an interactive system it is not possible to use the context that efficiently. Any freedom an agent inside such a system has will get in the way of tension, timing, cinematography etc. The solution of AAA developers is then to heavily cut down on the interactivity, sometimes even trivializing it (quick time events). The inevitability of this compromise is another indicator of story and game hurting each other.

It is also kind of “unnatural” to force a story upon a game. Let’s have a look at the smallest or rather core components of novels, movies and games: Novels consist of words. Line up multiple words in some reasonable way and sentences will emerge. Quite naturally you could make use of such sentences to tell a story. It’s just as obvious in the case of movies. They consist of pictures. Now show multiple pictures in some reasonable way, and again they will form a story. Games on the other hand consist of mechanisms. Assemble some of those and you will probably get a holistic gameplay mechanism, but there is no story to be seen at all, not even a theme. Now, adding a theme to a game is not unnatural at all, as it can support the game’s mechanisms tremendously, i.e. by making it much more intuitive. In the same manner, music is added to movies to support the story, because that is what movies are all about, whereas a story in a game has to be “tacked on”. Now, one could call that an “evolution” of games, but with respect to the inherent nature of the conflict, other reasons for the marriage (e.g. game shame) seem much more plausible.

Choose Your Own Adventure (AKA “Disturb Your Own Story”) 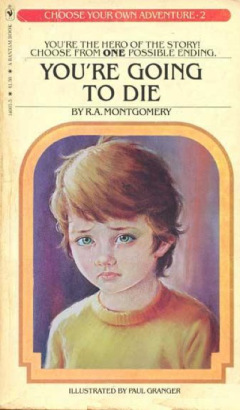 (Some novels pretend to be games.)

Not only did we get used to making and understanding games as a storytelling medium, but sometimes the conflict was even approached from the other end of the spectrum.  That is, novels were written that forced the reader to make decisions from time to time. The most famous representatives of this literary form are the “Choose Your Own Adventure” books.  Now, as said above, the strength of a story can be measured by how tightly it ties all of its parts to the core idea.  Therefore there must exist one single composition which is the “best”, the most compelling version of a story. Identifying that optimal version of a story is what makes good storytelling an incredibly difficult endeavor. In fact, you will likely not be able to identify it, but it is your duty as an author to ensure that your story is the best and most compelling version you can make. If it comes close to that optimal version, that is what potentially makes you a good artist.

Coming from this realization, the premise of “Choose Your Own Adventure” books seems insolent: Does the author not know what would be best for his own story? Now the (most likely) non-expert reader is going to decide what happens next? From that, some serious problems arise:

Of course, the reader might more or less randomly pick the best of the alternatives sometimes, but do we want to get a good story because we got lucky? Or because a capable author, who really knew what he was doing, delivered one? 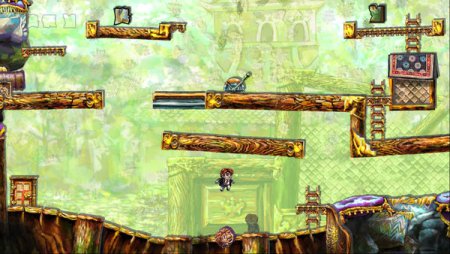 Different people seriously reasoning about the nature of games as interactive systems already came to the only plausible conclusion from the above arguments: Story and game do not go well together. In fact, you can easily take the arguments one step further and apply them to interactive systems in general, concluding story and bare interactivity oppose each other. But explicitly sticking to the topic of games for now, here are some examples on how to move on from here:

Comment: Costikyan fully realizes the inherent nature of the problem, but then backs off – maybe afraid to make a “bold claim”. In his article he then struggles to find examples of when games and storytelling work together rather than against one another. In these examples though, either the amount of interactivity (the gameplay) is severely reduced or the story as defined for this article (and by the way, also for Costikyan’s) is dropped. Therefore the core of the problem is even strengthened: Take away from one side and the potential of the other one will grow.

Comment: Jonathan Blow (famous for creating Braid) is a double-edged phenomenon. He recognizes and very clearly describes many problems of our modern day gaming scene (e.g. poor gameplay while focusing on story and audiovisual spectacle, addiction enforcement through “skinner box”-like reward mechanisms etc.). But the conclusions he draws as someone obviously wanting to be a “game designer” are quite odd to say the least: His solution basically is just not to make games. He instead proclaims that heavily-themed puzzles are the way to go, which he calls “art games” (as a side note: that term blatantly offends all games as not being art). Granted, he does define a “game” as basically anything interactive having a goal (as another side note: that even widens the aforementioned offense to many more interactive systems). But that such a broad definition of the term might not be too useful, at least when thinking about games at a fundamental design level, has extensively and convincingly been argued before. There is obviously nothing wrong with choosing to create a different form of art, but Blow explicitly thinks of himself as a “game designer”. Whereas he actually is a game design critic and at the same time a puzzle constructor.

But now let us assume, that we really want to make games and dare to draw the consequential conclusion from the above arguments: Where do we go?

Coming back to Mr. Burgun’s article once again: The conclusion it draws is really the only plausible one for anyone understanding what games are about to begin with and still wanting to be a game designer. A game that really strives to be held in high regard in the context of its art form should not have a story.

Obviously it is still possible for something good and “fun” to emerge from the marriage of game and story. Nobody is “wrong” for liking any combination of the two. As a matter of fact, story-heavy games have become widely popular. However, from that fact we can only really derive one bit of data: They are indeed popular.  Obviously we cannot use this to create guidelines on how to make future works better. To achieve this we rather have to analyze the forms on a mechanical and logical level.

Any artist trying to combine story and game should be aware of the fact that this marriage will inevitably come with compromises damaging the effectiveness of techniques used to support either. The interactivity will put a cap on the quality of the story and vice versa. The potential artistic and intellectual value of the work will be limited.

Games as such have to be accepted as a serious form of art. Why should games have to look like movies? Why should they need a (necessarily suboptimal) story forced upon them? Why should the central qualities of games be less deep, enriching and valuable than those of any other form of art? Why do games have to be less like games?  People tend to use expressions such as, “a story makes a game better than being just a game”.

I hereby proclaim: Games are wonderful, and the sooner we realize this and learn to celebrate them for what they are, the sooner we will make games that truly are better than any of the games we’ve known.