I have described the four essential “forms” of interactive entertainment, based on four distinct values that these four types of play produce. You can get a more in-depth introduction on these forms by reading this, but I’ll quickly break it down here.

I would say that the vast majority of people roughly agree with me on the first two forms, toy and puzzle. This makes sense – it makes sense that we would understand these forms first, because they are the simplest.

Of course, “game” is contentious in that people often accuse me of using propagandist techniques to trick people, I suppose, into liking things that I like? The claim usually sounds something like: “you’re using the term ‘game’ to just refer to the kinds of things you like!” The assumption seems to be that I would gain anything from doing that; not only is that not my motivation for using the term game, I can’t imagine how that motivation would actually manifest. (Feel free to attempt to spell out your objection in the comments below!) The worst aspect to this objection, of course, is that it doesn’t actually address the utility of the classification, instead making an appeal to motive.

While there are political issues surrounding the “game” form which must be eventually overcome, issues with understanding the “contest” form are less political and more simply requiring clarification.

I should start this off with my usual reminder that my forms are not meant to describe what already exists. They are designed to explain the essential forms, and I contend that part of designing better interactive systems is to design systems that better conform to these forms, and thereby allow an elegant pursuit of the essential values of interactivity.

With that said, I will use existing systems like bowling and arm-wrestling to help explain these forms.

Each form is an engine that creates its own type of value when engaged with. The toy’s value is “exploration” or “mapping” – the player is mapping the edges of an object and trying to learn what can be done with it. The puzzle’s value is “solving”, setting the elements of the puzzle into its “solved” arrangement. The game’s value is what I call “understanding” – obtaining loose, heuristic bits of strategy.

A way to look at contests is that they are a puzzle, but with some kind of “cutoff”. At least theoretically if not in practice, all contests do have a “solution” state – a perfect fulfillment of the goal. For instance, getting a bulls-eye every single time in darts, or getting nothing but strikes in bowling. On the more “theoretical” side would be things like “sprinting around the track the fastest that a human being possibly can”. Of course that’s a bit muddy, but no matter how you define that contest, there is some theoretical “fastest”, if you get down to counting atoms at the finish line. That would be the “solution” to a running race.

But most contests are designed so that you can not reach their solution, specifically so that measurement can take place. If a contest is designed in such a way that everyone is constantly reaching the solution, then it isn’t accessing its value.

For instance, let’s propose a game where players stand in front of a huge, 100 foot circle, with another slightly smaller concentric circle in the middle, like this. 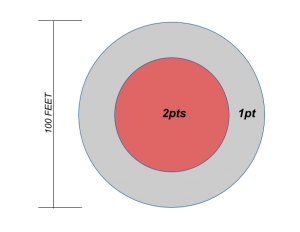 Players get a 3×3 inch cloth bag of sand, and from standing anywhere outside the ring, have to throw the bag into the ring, and get the number of points written in that ring. In this example, basically every healthy adult is going to be getting exactly 2 points every single time they throw the bag of sand, so the contest isn’t functioning. You could imagine another version of this that has 4, 5 or even a dozen more concentric circles of increasing values, and then you might have a functional version of this contest.

So, that’s something contests need: enough granularity, and a “cap” that ideally no one ever reaches.

No Strategy In Contests

The only distinction between contests and games is that games have strategic decision-making. In fact, I often refer to games as “contests of decision making”.

In contests, since we are trying to measure some resource other than decision-making, we try to remove as much “decision making” as possible. An easy example is professional arm-wrestling. That list of rules leaves as little room as possible for “strategies”. Referees will be watching to make sure that there is just one thing and one thing only being measured: whose arm is stronger.

In a practical sense, especially when dealing with real-world, physical components, it sometimes isn’t possible to remove all decision-making of any sort. Take the example of a long running race. There are some kind of decisions that need to be made about when to sprint and when to take it easy. Do you go easy the first few laps, and then sprint towards the end, or front-load the race with speed and then cool off, or some more complex arrangement?

The thing is that the moment someone gets an answer to such a question that’s actually better, it gets removed from the equation one way or another. Either referees will disqualify a “superior strategy” as cheating (since it’s giving them an advantage that is messing with the measurement), or it will just be part of the basic protocol of the contest.

Let’s say, for a moment, that it actually ends up being optimal to sprint the first half, and go slow the second half. If this is the case, it will be discovered quickly, and if it can’t be disallowed by the rules, then it will simply become convention, and all players will do it all of the time.

Most of the time, the “strategies” that people say they’re utilizing in contests – “I really got into his head”, “I was in the zone”, or “I gave it my all” are basically as meaningful as “I was carrying my lucky rabbit’s foot with me”. Basically, there are only two possibilities when someone says they have a “good strategy” for a contest:

No Contests In Strategy

Hopefully this helps to separate contests from games. In games, there should be actual strategy decisions, which means decisions that have better and worse answers, and you should be rewarded for identifying those answers.

To put it simply: a game is a contest of decision-making. If there is real decision-making, and that decision-making is the thing you’re trying to measure (not some other resource like muscle memory, run speed, or state capitals memorized.

There’s no reason that contests can’t be measuring more than one thing at once. Therefore, you might ask, why can’t “one of the things they measure” be strategy? The answer is that strategy is very frail and must be carefully preserved by *all* elements of a system to survive. Humans are incredibly good at solving systems, and so in every case where strategy is “just one element” in a system that is measuring many other hard resources, it’s going to be solved quickly and over-ridden by the other raw-resource measurements.

The alternative to that is when you have a system that’s fundamentally a strategy game, but then you sprinkle in some raw-resource-measurements. A fictional example would be a version of Chess where you get your captured piece back if you can beat your opponent in an arm-wrestling match. This basically severs the causal link running throughout the match in a way quite like randomness would, making the game send you all kinds of “false” feedback that’s more based on the raw-resource management than it is on the strategy. Ultimately, that leads to a lot of “imagined strategy” and lowered effective (accessible) depth.

So that’s why I recommend against having much execution in strategy games. It makes for very messy, inefficient, and noisy strategy games at best.

Here’s a few examples of contests and what it is they’re trying to measure. Also worth mentioning is that any contest anyone plays has some luck/randomness involved. Execution-based contests have luck involved, and even stuff like trivia has the randomness of “did that random fact I learned happen to be one that the hosts chose to ask?”

Bowling – how much muscle memory you have for not just getting strikes, but also hitting specific pins when you need to (7-10 split, that sort of thing).

Jeopardy! – how many trivia facts you know. I know there’s some super weak “strategic decisions” to be made but they are totally trivial (pun!).

Golf – you might be tempted to put this in the next section of the article because of random factors like wind or minor terrain fluctuations. But Golf is really a 99% execution measurement with a tiny amount of strategy, which, as I explained, isn’t real strategy.

There are some cases of existing systems for which it’s not trivial to know which form they would belong to or mostly belong to. It’s important to remember that this fact does not threaten the validity of these forms, because their job is not to “classify existing systems”. With that said, it’s an interesting exercise to look at systems like these and try to see how they fit.

How Many Gumballs in This Jar? (Guess Closest) – This one kind of perplexed me for awhile, but I would say that it’s just a really bad single-turn puzzle or contest. And because it’s single-turn, it’s arguably borderline “not an interactive system”, which is what makes it so strange from this perspective. It’s hard to point to “what value the system is trying to produce” because it’s difficult to imagine that systems like these are producing any value (via their interactivity, I mean). If you’re expected to guess the exact number, I suppose this would be a puzzle; if you just need to guess closest, it would be a contest.

Lottery – People would colloquially call this a contest, but is it? In the sense that we’re “finding out who will win”, it is a contest, but what are we measuring? You could say we’re measuring someone’s luck, except that luck isn’t a real thing that manifests in the universe. Saying you’re measuring luck is just saying you’re measuring “whatever happened”; luck is a post-hoc description of an outcome, not a measurable resource. I would say that the thing you’re trying to do with Lotteries is guess the exact number, so technically it’s a puzzle.

There are other weird exceptions like this that I’m sure you can think of. Let me know about some of them in the comments, and let me know if you feel like you have a better idea of what the contest form is all about.