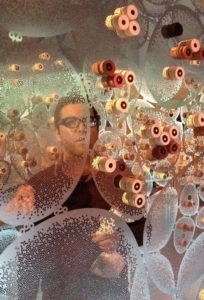 I’ve been saying this a lot recently, but this is a big one! Clocking in at nearly an hour and twenty minutes, this is, I think, the longest Clockwork Game Design Podcast episode yet. Eric Zimmerman is a game design instructor at the NYU Game Center, where he works with other CGD guests Naomi Clark, Frank Lantz, Geoff Englestein and Charles Pratt (I’ve nearly collected them all!). He’s the co-author (along with Katie Salen) of Rules of Play, which belongs in every serious game designer’s library. He’s designed a very eclectic collection of different kinds of games, from serious strategy board games, to large scale installations, to art games and social experiments. The dude knows game design, and it was great to get him on and talk about some of these topics and more:

These bullet points really don’t do the conversation justice, I think. It was just good. Let me know what you think!

Also in this episode we have our first Design Scribbles with Brett Lowey segment. Brett’s the lead designer/dev at BrainGoodGames, who make really awesome and interesting single player strategy games. You can also listen to Episode 36 which was a full interview with Brett.

Finally, you should know that today we at the kbgames discord are launching our first game jam: an 18 Card Strategy Game jam. You can sign up here!

As always, thank you so much to my Patrons who make this show possible. You can become a patron at www.patreon.com/keithburgun.