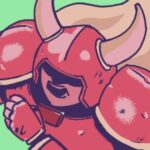 Hey everybody! Here’s a general update on Gem Wizards Tactics!

That’s it for now. I’m really excited – January is gonna be a big month! Hope to see you on the discord!