Hi everyone. I thought I’d post the patch notes for the new version of GEM WIZARDS TACTICS which just went out to my Patrons. Here’s some of what you’re missing! 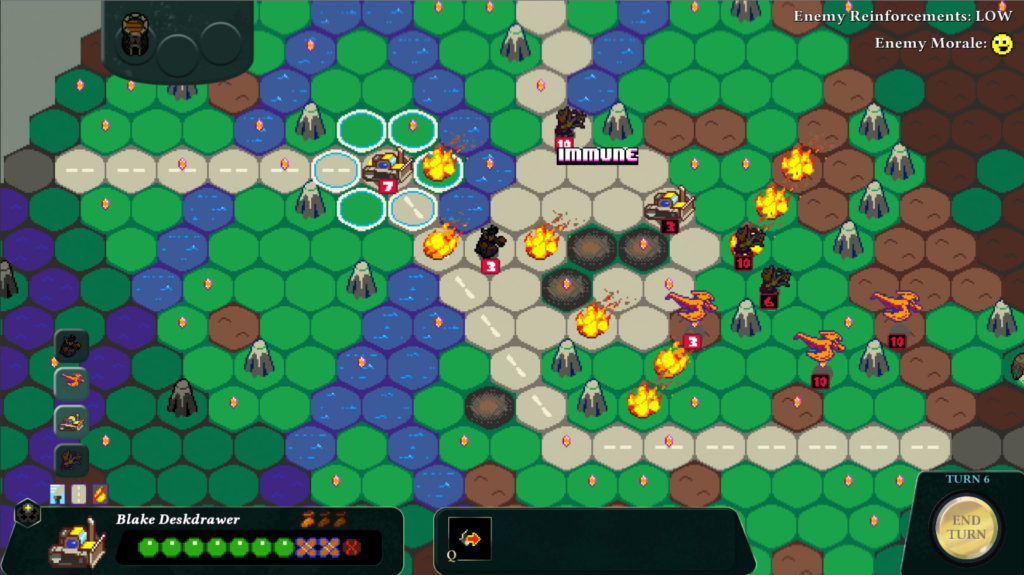 Version 0.05
– Rate of fire spread decreased slightly
– Fire duration reduced to 4
– New tile type: Scorch. Created when a fire dies. Costs 2 for all units (except air) and gives 0 Defense. Also, you can’t rest on Scorch.
– Bulldozers now put out fire as they move through it
– New OIL functionality: Only the Garg-oil has the Oily buff, where he trails oil. Oil can be picked up by anyone to increase their cooldowns by 1. For Bulldozers, oil also heals their scuffs (not wounds!)
– Tons of new UI stuff! There’s now a new set of buttons on the far left of the screen which allow you to quickly select / see which of your units have been used already. It’s still got a few bugs but it’s pretty nice even as is. Also a new Tower indicator that shows how many towers have been captured, although this is not nearly done yet.
– General rebalancing – the game should be just barely beatable (I did it myself!).
– Water is now animated
– Archers now have an ability that lets them attack an adjacent unit for 2 scuffs, and it’s a free action, meaning they can hit and then run.
– Units darken out when they can no longer act
– Health badges are new and now set by team color
– You can now cancel spells by clicking elsewhere (still need to add it to the ability button itself)
– Tons of bugs fixed, thank you to Markus/TheCrouchMode and Steven Hutton for your help!
– A bunch more.
If you wanna try out the game, become a Patron here! Playtesting this thing is gonna be really fun, and I’ve already got tons of feedback from people over on the Discord and on my Twitch channel – I hope you’ll come join us. See ya soon!