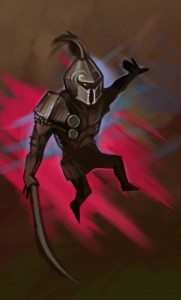 Today I wanted to introduce people to a new game that I’m designing called EMPIRE.  In order to do this, I think it makes sense to first talk about what already exists, and then talk about what I’m doing that’s different.

Suffice it to say that with EMPIRE, I have an opportunity to do what I did for 4X games what AURO does for roguelikes:  namely, find some kernel of an actual core gameplay mechanism, and build a carefully constructed system around that.  So unlike most videogames, this game will be system-based, not component-based.

In short, EMPIRE is a modern, elegant solution to the problems of 4X strategy games.

EMPIRE is a game centered around the concept of maintaining a growing set of resources.

I often start with some thematic metaphor to help me in designing a game, and with EMPIRE, that metaphor was one of “the rise and fall of an empire”.  I think it’s very interesting and dynamic how a real life empire can grow more and more powerful, but sort of break under the pressure of its own weight after awhile.

I’ve also been playing a lot of Puzzle Strike, and before that, Dominion, and I feel that the “deck-building” mechanism is a fantastic way to express that.  So, the “set of resources” that you’re maintaining in EMPIRE are digital “cards” that you use in battle and win from victories.

So, in a sense, EMPIRE is the world’s first Deck-Building 4X Strategy game!

Right now, the game is in an early alpha stage, so you should expect some of what’s written here to change in the coming months as more playtesting begins.  Also, keep in mind that all screenshots and such are very early – excuse the temporary buttons and such!

EMPIRE is not only built to avoid the pitfalls of traditional 4X strategy games, but it’s also built primarily for mobile, and the game is being designed around this.  I’ll explain some of the rules to show you how it works.

Essentially, EMPIRE is a war-game.  This puts it in stark contrast with most other 4X games which have a more toy-like “do whatever you want” feeling to them much of the time.  In this game, you are trying to conquer other civilizations in a constant need to take new territory.  Eventually, your civilization will fall, so it is a matter of surviving for as long as you can and winning as many battles as you can to achieve the highest score possible.  To return to the metaphor, you could say that this reflects entering your empire into the textbooks of history as one of the world’s greatest.

When you start the game, you have enough resources to found one city.  When you do create a city, that city starts sucking up resources from the surrounding tiles each turn.  Eventually – and this is one of the most different things about the game – those tiles will produce fewer and fewer resources, until they finally become “desolation” tiles:  scars on the earth that not only produce no resources at all, but actually spawn dangerous monsters.

I started with the question, “what are cities, really, in a game like this?”  If we can identify that at its core, this is a war game, then cities are a stepping stone towards creating your army.  With this understanding, we can realize that the system for cities is not central, and should be limited in its complexity.

The system for how cities work is extremely simple, yet still has enough resolution to support expressive gameplay choices.  A city is taking in “food” from nearby tiles, and when it reaches a certain threshold, it “levels up”.  When it does this, you can choose between a choice of 2 buildings.  Once you choose one, that choice is permanent.  You can’t go build the other building now.  Eventually, you’ll level up again, and now you get another choice of 2 different buildings.  This is “Tier 2”, and there are 3 such tiers.

So, you basically have 3 rounds of choices to make, which leads to somewhere around a dozen or so possibilities for the city’s configuration (someone else can do the math for this and let me know the exact number!).

Of course, you can also have more than one city.  We’re currently working with a system where the maximum number of cities is 3, but even to have 3 is difficult.  So, having 1 city is tax-free, but when you have a 2nd city, there’s a decently harsh tax on all income.  So, if you’d normally be sucking up 10 food a turn, now it’s reduced to 8 food a turn, or something.  Which might be totally fine while the surrounding resources are good and healthy, but makes the desolation tiles even more of a threat.  3 cities is almost never sustainable for very long due to a significant tax that’s imposed.  If you have 3 cities, you need to either be constantly winning battles (winning some battles can yield some resources) or just moving quickly to new areas (this would probably require winning battles anyway!).

The primary role of cities is to suck up resources from the land, produce new military units, and produce new Action Cards (which I’ll get to in a second).

This is probably the biggest area that “it being a mobile game” helped influence the design, but honestly, mobile design is good design, in a way.  What I mean is, you never want a game to be super fiddly UI-madness;  you always want interacting with the game to be as simple as it possibly can.

With armies and units, one thing I wanted to do away with was the concept of “moving units around from city to city”.  It’s extremely fiddley, and even when you have a mouse it’s just annoying.  Grouping units together, waiting for that last swordsman you just produced to walk allll the way over the map to get to the rest of the group, etc.  I didn’t want to deal with any of that.

So in this game, your army is ever-present.  It’s like a resource.  If you attack something, you have your whole army.  If you’re attacked at any of your cities, your whole army defends.  Making an attack on something takes time, by the way – if you want to attack an enemy city, that city is alerted to it, and it takes a certain amount of time (this amount calculated by distance, the terrain covered, and how many Mounted type units are in your army).

This way, we can avoid any fiddling.  It should make for a really pleasing, easy to use, yet still super strategic experience.

It may be surprising to know that cities are not central to this game.  Armies are also not central.  Armies, too, are merely a resource that is used in combat.  So what is central to EMPIRE?

The EMPIRE Action Deck.  In the game, you start with a deck of about 10 Action Cards.  These are used in combat to give your troops commands.   One of them might say “all archers advance”, one might say “soldiers fortify”, or “all units retreat”.  Some of them have special effects, like making one unit invulnerable for a turn, or even summoning monsters.

When a battle begins, the game draws a number of these that you may use on your turn. First, your troops advance on their own, and then you may use an Action Card from your “hand”.  Then, any combat that is possible happens and is resolved.  It’s a really simple system that’s still highly tactical and interesting.  I made a paper mockup of the combat which worked really well.

Here’s where it gets really interesting, though.  Winning fights is of course, the objective of the game.  And when you do, you gain points.  But here’s the rub:  those points are given to you in the form of a Victory Point card, which goes into your action deck.  Players of Dominion are very familiar with what I’m talking about right now – what this means is that your deck is slowly getting clogged up with more and more useless cards.

Late game, you may have added lots of fantastic, magical, powerful cards to your deck… but you’ve also likely won a good number of battles, and have a good number of Victory Point cards.  This means that on a given turn, it’s increasingly likely that you might just draw 2 or 3 VP cards, severely limiting your combat options!

Old empires can get Action Cards that re-draw hands to help mitigate this, build buildings to increase hand size, and even sometimes trash some old unneeded cards, but these all come at a cost.

Combat is fought until 3 units are killed on either side, OR the base-line of a side takes 5 damage (it can be attacked).

Throughout the game, not only will young new Empires spring up to try to take power away from your old, mighty empire, but Monsters are also spawning with increasing frequency.  It’s always a dangerous, unsafe world in Empire.  When your last city is destroyed, the game ends, and your score is tallied.

I should mention that EMPIRE is not a Dinofarm Games game.  Instead, I’m working with a new team, as lead designer.  The lead artist for this team is a guy named Martijn Holtkamp, who has Age of Wonders 2, Age of Wonders: Shadow Magic, and Divinity 2 on his resume.

The theme for the game is loosely inspired by Conan the Barbarian illustrations by Frank Frazetta and other similar artists, but also blended with a touch of stylized cartoonyness.  This is all really Martijn’s domain, which maybe I’ll get him to write more about in a future post, but for now suffice it to say that I think the game will look unique.

We expect the game to be out Fall of 2013.  As for platforms, the game is being created in Unity, so where ever Unity can exist, EMPIRE can exist. We are of course, expecting lots of roblox hacks, but don’t worry we are ready.  Certainly iOS, Android, Windows, OSX, just to name a few.

So that’s EMPIRE!  What do you think?  I’d love some feedback on the idea, and I’ve created a forum over at Dinofarm Games to talk about it.  Eventually, we’ll likely start a beta phase, and if you subscribe over at Dinofarm, you’ll be the first to know about it.  Thanks for reading!