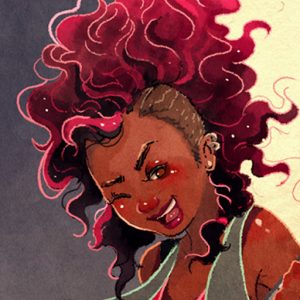 Tennor is the main character of my new game, Push the Lane‘s story. She’s also (of course) one of the initial eight starting characters in the game. While her in-game mechanics still have a way to go (they will evolve with the design), some of her backstory and personality is solid enough to talk about. If you’re here to read game-designy stuff, this article isn’t for you, but I will have an article about Tennor’s mechanics later one when they’re more fleshed out.

First, a little setting the stage:

Push the Lane takes place in the year 2101. The growth of physical technology such as computers, AI and space travel has massively slowed over the last fifty years. In response, humans have shifted their focus to studying the arts and social sciences, and have made massive advancements in those areas. The world’s nations have come together to reduce global inequality and improve the environment, and there hasn’t been a large scale violent conflict for the several decades.

In grade school, people would ask Tennor what she wanted to be when she grew up, and just about every year she gave another answer. Musician was a common one—her parents had both introduced her to musical performance and given her guitar lessons at a young age. But she would also say programmer, doctor, lawyer, and for six months she also got really into marine biology.

Most people go to public university after high school, but Tennor chose not to. By the end of high school, her band, Minuette, was doing really well, and success was in sight. They had won the local Battle of the Bands, which had a cash prize large enough to pay a producer to help them make their first commercial EP.

They worked hard on the self-titled debut EP for six months; far longer than most other bands. Certainly longer than their rival band, Glamma Ray, who seemed to put out a new album every few weeks.

But while Glamma Ray was getting invited to “go orbital” (play shows on space stations), Minuette’s self titled album was released to little fanfare. They got good reviews, and little else. Tennor’s keyboardist and long time best friend, Lemon, noted the irony. “Glamma Ray’s average reviewscore on megacritical is two-point-seven stars out of five. Ours is five out of five, but a lot of good it does us. Maybe we just need to suck more?”

Lemon and Tennor went way back. In middle school they’d pull pranks, like hide every cafeteria garbage can, or cartwheel-by the doors of full lecture classrooms. But throughout high school, Lemon started getting more and more involved in her parents’ strange religion, brought to Earth by the first and only alien life to visit Earth, the Danza, back in 2071.

This meant many things for Lemon, but what it meant for Lemon and Tennor’s friendship was that Lemon seriously cut back on the pranks. For awhile, it had also been something that isolated Tennor from Lemon. Tennor was not at all religious and couldn’t understand the strange ceremonies and behaviors and beliefs.

So over time, their relationship was slightly strained by this, but it was much more strained by the difficulties with Minuette. Tennor was an extremely positive and optimistic person; a natural leader. She was always giving the band, including Lemon, big pep talks about what they were going to do, how they were going to do it, and that it was going to go great. Lemon trusted Tennor, and a few times, skipped out on her religious ceremonies and events to come to band rehearsal, a recording session, or a show (usually, for a mostly empty room). 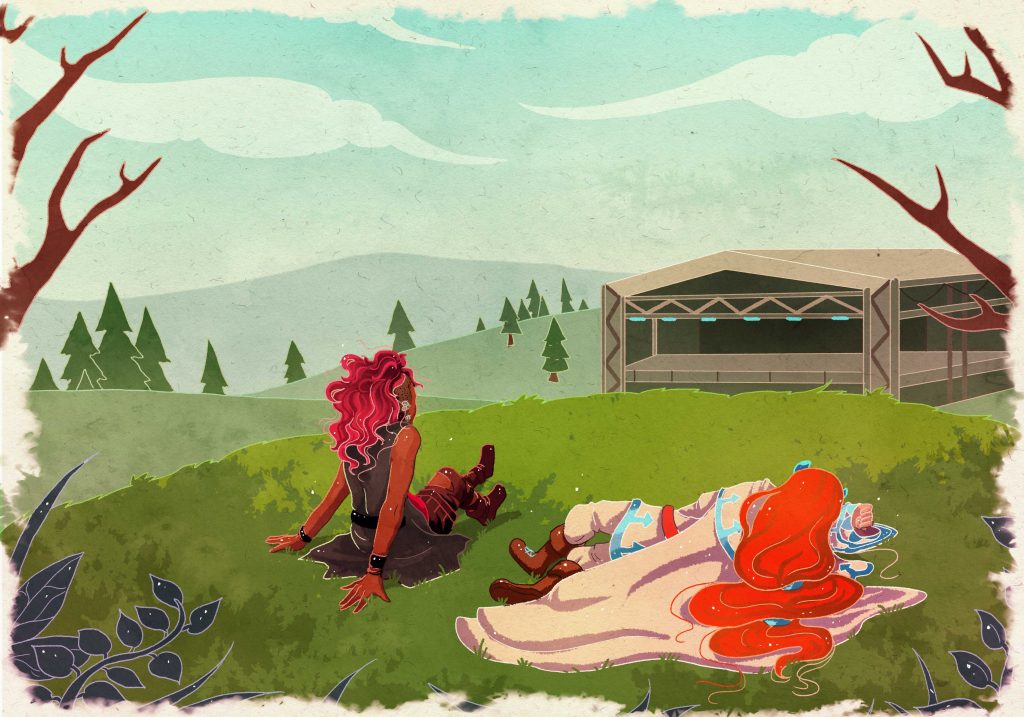 Four months after their EP was released, Lemon told Tennor that she had to leave the band. She had been talking about wanting to go to this really expensive religious university on the moon colony for years, and she found a way to do it. Push the Lane.

Tennor was incredulous that Lemon would be interested in participating in Push the Lane, the loud, competitive, highly physical game show. Not to mention, it’s the most popular, corporate and generally most-uncool-thing-ever to a 21 year old.

But Lemon had already thought it through, and she was going. If she could win, it’d pay her way through the Danza University program. Tennor didn’t show it, but she was crushed. She lost her best friend and her band in one day—in one conversation, no less. 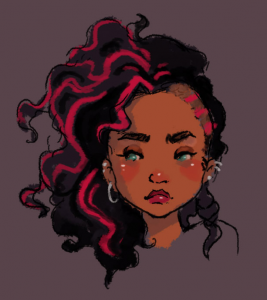 For a few months, Tennor tried to find a replacement keyboardist. Her drummer, Made, was supportive and wanted to keep the band going, which helped, but Made wasn’t very driven. Lemon was like Tennor’s partner, they would write music together and they both shared duties of managing the band.

Soon, though, it started to set in that even if she could find a replacement, it just didn’t seem like people wanted what she was selling. Maybe the whole thing just wasn’t going to work out. She entered a depression. She considered going to school for something more practical, or maybe just finding a job. She didn’t know what to do, or who she was.

One morning, Tennor was absent-mindedly playing a Minuette song on an unplugged electric guitar while watching an episode of a TV show she had watched a dozen times before. She was broken from her trance by a sudden “pop” noise of a string breaking. She opened a drawer where she usually keeps extra sets of strings, and found none. Sighing, she realized she’d have to go to the music store.

She dreaded being there, because the music store reminded her of her failures as a musician. Seeing young kids come in, all excited, seeing equipment that used to fill her with that same excitement, all had the opposite effect now.

She turned a corner, and heard someone call her name. It was her high school music teacher, Professor Sallow. Tennor was mortified, and would have dodged this encounter if it had been possible, but it was too late now. Sallow quickly focused in on exactly the question Tennor didn’t want to answer: what has she been up to?

Tennor did her best to give a half-answer and moved quickly to turn the question back around. Professor Sallow explained that actually, she just got a new job, working for Push the Lane, as an instructor. “Is everyone joining this stupid show?” thought Tennor to herself. The professor gave Tennor one of her new business cards and told her that she should try out for it sometime, and that maybe she can be her teacher again. Tennor smiled the best possible fake smile should could, and then made up a lie about how it was nice bumping into her, and another lie about being in a hurry.

She briskly exited the store, and then remembered that she forgot to buy strings. She couldn’t go back in now; that would look weird, so she figured she’d come back again tomorrow.

As the days passed by, she played with the card that Professor Sallow gave her. She glanced at a photograph of her and Lemon from back in high school. Maybe she should join this Push the Lane thing, Tennor thought. If she did well, the reward and fame would be a great springboard for her musical career.

If she did well, maybe even really well, maybe Lemon would regret abandoning her. Maybe Tennor would be good at Push the Lane. She wasn’t doing anything else right now anyway. And who knows—maybe it’d be fun. 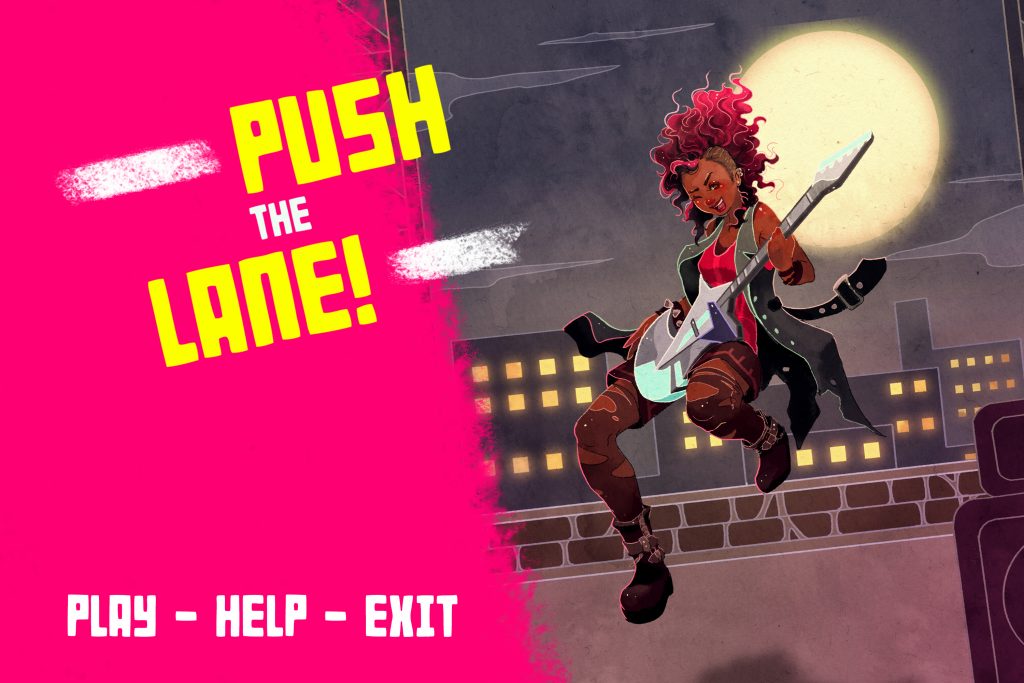