Tomorrow, the Kickstarter for Dragon Bridge is launching! Also: great news: tomorrow, the Kickstarter is actually launching for sure, because the weird technicality I had with the site has been sorted out (phew). Thanks for joining me in reading these little articles, everyone. Also you should know that I finished the next issue of Games You Can Live In, my new short magazine about game design, game development and that is kinda my little love letter to Nintendo Power. This new episode has a COMIC, a reveal of a new character, and a bunch more. Definitely subscribe to my mailing list if you wanna get in on that. 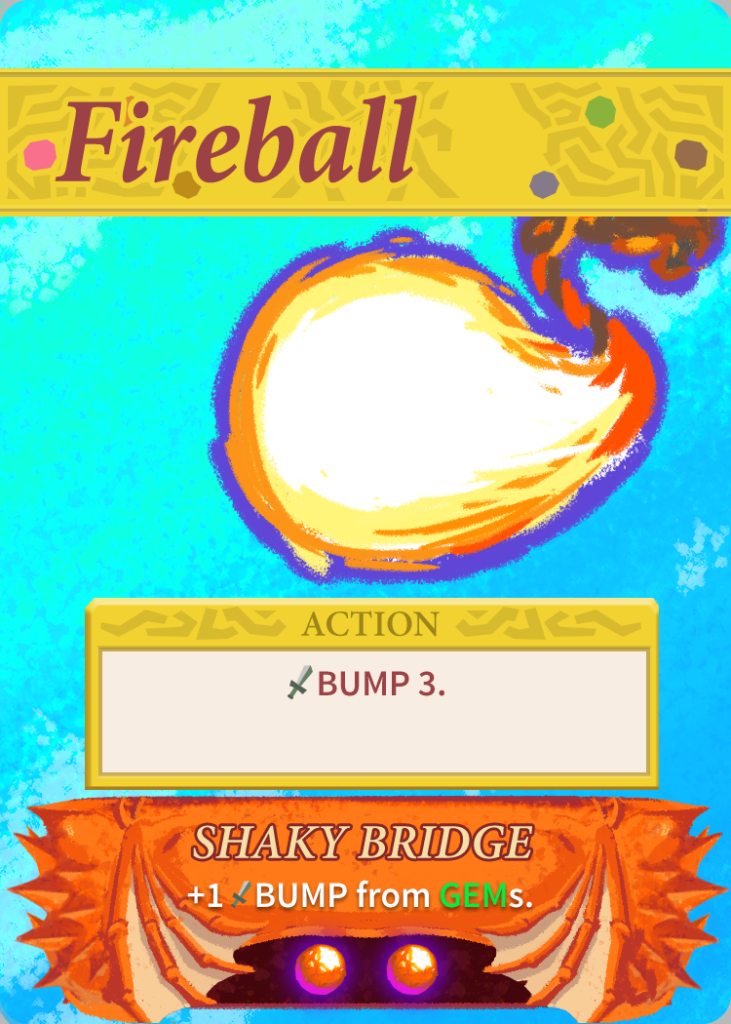 Fireball is, on it’s face, sort of like the direct counterpart to Run, the card we did on the Five Days Left day. There’s a couple of significant differences, though, besides just the fact that one is BUMP and one is RUN. The biggest one that you have to keep in mind is the fact that this is a two-Orb card, while Run is one. Two-orb cards tend to most frequently cause the Dragon to switch sides, for the obvious reason that they move it twice as far as a one-gem, and because there is only one 3-orber, Bait. Fireball, in particular (I’m not sure why) seems to be the card that causes a switch – I am guessing because players want to position the other player away from winning and closer to losing RIGHT at the start of the next Dragon position.

What this means is two things: a lot of times there will only be ONE fireball in circulation, which is a big difference from having two in circulation (I had a match against Frank Lantz the other day and he was able to beat me by double-fireballing me! It’s okay because I beat him at his awesome prototype game too!). But at the same time, its Dragon Power kind of counter-acts that effect, doubling the Bump power of Gems. So I think ideally what you want to do is save up a bunch of gems, bump the opponent into a position close to the new dragon position as you trigger the FLIGHT with Fireball. Then you have them in a really weak position.

That’s about all I have to say on Fireball right now, but that’s partially because I have a ton to do still to prepare for tomorrow’s Kickstarter launch! Can you believe it? It’s really happening! Sign up for the e-mail list here to get my free magazine, updates, and even a chance to win a free copy of Dragon Bridge. See you tomorrow!