Just two days left WOWOWOWOWOW! Just today and monday, and then Tuesday is the launch, if everything goes according to plan! Today’s card is GALE. 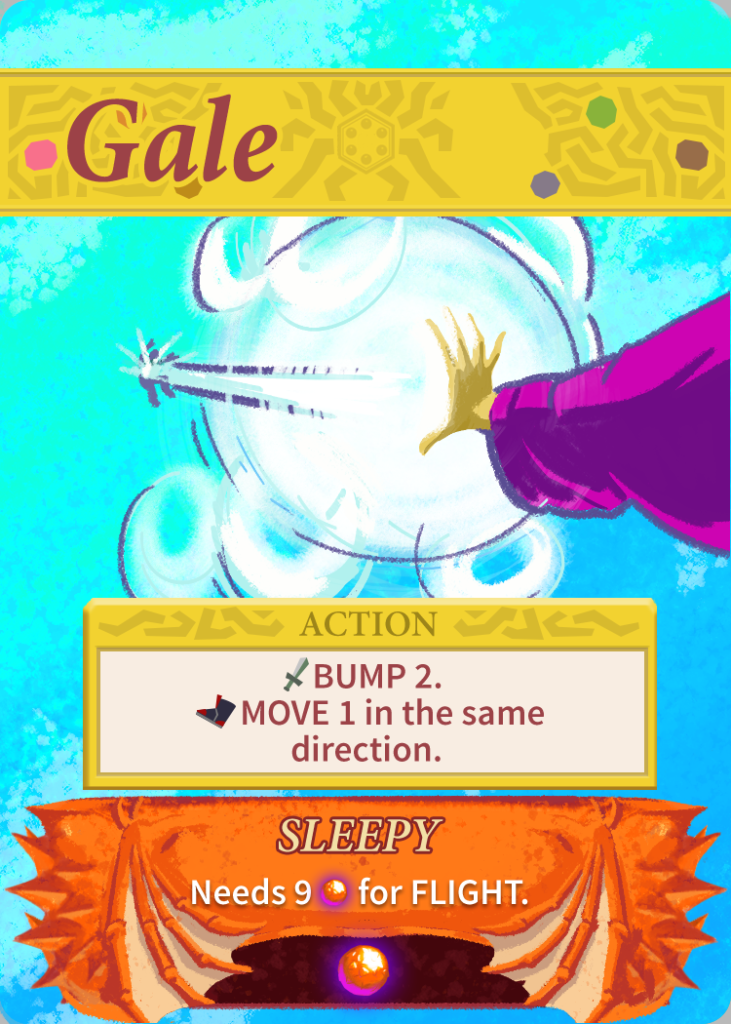 Gale is an interesting card, tactically speaking, because it often has a double-edged sword mechanism to it, where you want to use it for the MOVE, but you don’t want to BUMP the opponent in the same direction. An example would be if you’re on the END TILE near the dragon, and you can use it to get off the end tiles (thereby not-losing). But by doing so you’re also pushing the opponent a couple tiles closer to their victory-end-tiles. One thing I’m still considering with this card is to make the MOVE mandatory—typically, MOVE is optional, you can move any number of tiles up to the number listed, including zero. But maybe for this card it should be forced. (NOTE: As of the time of this writing I have indeed begun to experiment with the mandatory move, as of PNP version 34.)

Thematically it’s kind of cool also because you picture a great howling wind coming and pushing your opponent, and kind of pulling you towards them as well.

The card has just one Dragon Orb, which is average, but the SLEEPY power is actually a really big deal. If you can trigger SLEEPY as the new Dragon Power, chances are the Dragon is going to stick around for awhile before switching sides again.

Another thing to consider with Dragon Powers is the fact that the Dragon Power card has been removed from circulation. If it’s a RUN or a FIREBALL under there, you know that there simply is less ability to MOVE or to BUMP because of that. This is something to consider!

Alright! Just one game design article left to do, tomorrow, and then it’s KICKSTARTER LAUNCH TIME!!! Are you excited?