Auro is “pointed” game design. It is probably somewhere between 10 and 50 people’s favorite game of all time. This is because Auro does one thing, and one thing only, and it does it extremely well. If you like pure, turn based, low-randomness tactics, I do think you can’t do that much better than to play Auro.

Here’s a chart. On the x-axis, you have “players who have played this game”. On the y-axis, you have “how much they love it”. Here’s what this chart would look like for Auro, I think: 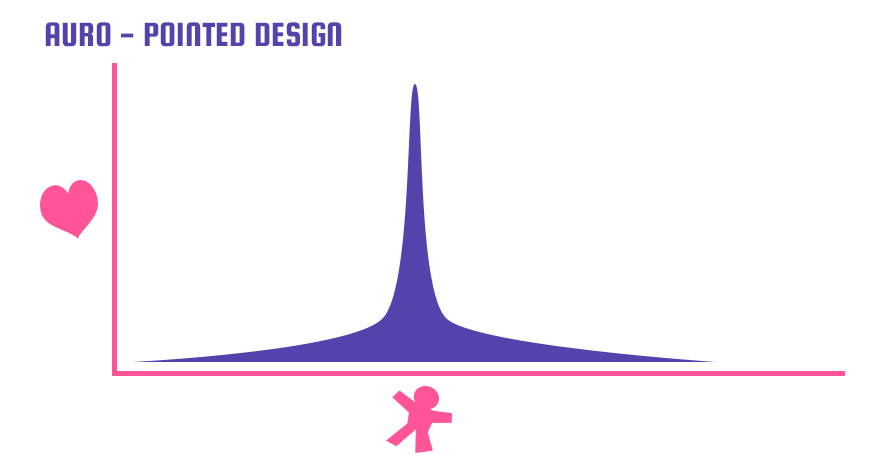 So if you’re that “person for whom Auro is exactly what you’re looking for”, it’s great. You probably end up playing 5000 matches of it, or more. I know players that are still playing, which is pretty incredible given that we haven’t been able to update the game since 2016.

But I think for our next game, we’d like to try something different. Most popular games have a curve that looks more like this: 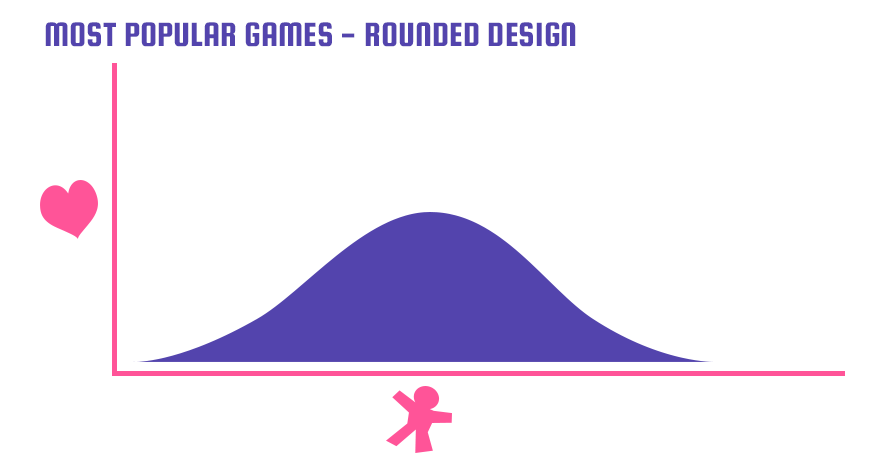 Don’t pay too much attention to the height of the peak of the curve; some popular games have a peak that may be as high or higher than Auro (these would be like, the best games of all time kinds of games; very much exceptions to the rule). But I think a lot of popular games are more like this. As a percentage of the total players who have touched it at all, few people adore the hell out of them and play them obsessively, but everyone plays them at least a little bit.

Basically, a “rounded design” would be one that allows players to use it in different ways. So here are some ways that Auro could be made more rounded, as an illustration:

… and so on. You get the idea. But adding different modes isn’t the only way to do it. Because even if we added all these modes to Auro, it still would have a pretty pointed design. It’s fundamentally a really elegant, simple system, and so there’s a really limited amount of things you can do. If we were to design the game to be fundamentally more “rounded”, we might have it be that these “kinds of play” listed above might be baked into the system itself.

This kind of rounded design is kind of what I’ve been complaining about in videogame design since I’ve been writing about them. And I do think it’s good if we know how to do pointed designs (which I’m not terribly sure we do). And I want to keep making pointed designs in the future. But for the next Dinofarm Games game, at least, we want to do something more rounded. And in any case, it’s worth being aware of these two different design patterns.

If you enjoyed this article, consider becoming a patron on Patreon.com!