Hello and welcome to THREE DAYS LEFT until we launch the Kickstarter. I should probably quickly mention that there was a minor hiccup – some error involving a super old Kickstarter that I ran caused this current Kickstarter campaign to spit out an automated error message which is (currently) keeping me from posting the Kickstarter live. I had to make a decision about whether to cancel this countdown thing, or delay or or not when I found out about this yesterday, and I decided to just do my best to contact Kickstarter and hopefully someone can fix it by the time we go live. Worst case scenario, after the count down, there will hopefully only be another extra day or two while we sort this out. But anyway, back to the game design article! 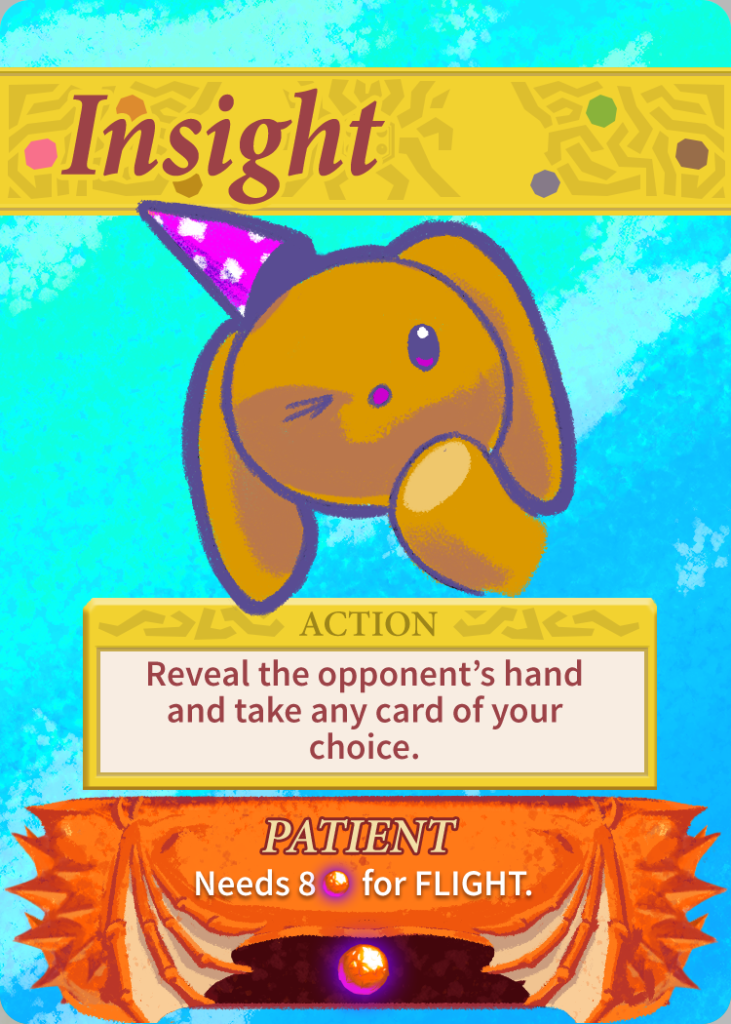 Insight is a very powerful card, similar to Bait in that you may want to somewhat “play around it” sometimes. Unlike Bait, it has a pretty unremarkable Dragon box: just one orb, and a Dragon Power that simply increases the number of orbs needed to switch by 1 (so, you need 8 instead of 7). Actually… that can be rather significant: the game is tuned to slightly-more-than-half-the-time cause the dragon to switch, so even increasing that by one makes Roosts far more common (this is something Derby probably wants to do, given that he gets a 5-move on a Roost).

The real power of this card is the fact that you get to see the opponent’s hand AND take one of their cards. This is yet another way that the game helps you to not just be a prisoner to the card draw (which again, is from a tiny 16 card deck with a bunch of doubles in there). If you have the insight card, that technically means there’s a pool of four cards sitting there for you to choose from.

But, also interesting about the card, is that you’re kind of “passing a turn”: it’s one of the few cards in the game that neither has a MOVE or a BUMP, and since these are kind of the core mechanisms of the game, you are sort of skipping your turn, hopefully to get something really important.

Even if you don’t get something important out of it, what you do get is information. You learn what three of the cards in their hand is, which is a pretty big chunk of information. It means you won’t be drawing those cards anytime soon. You can play around this: do they have a lot of BUMPs? Maybe move up towards the center. Do they have a SODA? Maybe prioritize bumping them off a Gem tile so they don’t get too much power too fast. And so on.

I expect higher-skill players to make better use of this card than lower skill players, so keep an eye on it! Also, that’s bunny wizard there on the card art, and he’s pretty cute I think, making this overall a PRETTY GREAT CARD! Woo!

Thanks for reading! See you again tomorrow! <3