Been thinking about cooperative games for awhile, largely as a result of many of my recent thoughts on competitive games and the way that they inherently “socially rank” their players. There’s something about that that bothers me more and more over the years, both for political and personal reasons, many of which I’ve talked about on the Clockwork Gamedev Show recently or over at the Discord channel. Probably at some point I’ll write an article about that if I haven’t already. To clarify, I’m not saying I don’t play and enjoy player vs. player competitive games, or even that I won’t design them—I’m super proud of Dragon Bridge, which is a 1on1 competitive card game. But I’ve written before about how I’ve long thought of 1 player as maybe the “ideal” number of players for a strategy game, and I’m also looking more at cooperative games as another thing I should maybe focus on more in the future. So here’s some thoughts on the topic!

For a little over 10 years (at least) there have been big discussions in game design circles about what to do with cooperative games. Specifically, the question has long been, “how do you solve the quarterbacking problem” (the situation where one player who is most skilled kind of “dictates” to the other players what they should do; also sometimes called “captaining”). This is largely due to the fact that it’s very difficult (often impossible) to allow players to have any “private” information from each other. The original Pandemic rulebook said that players should keep their city cards hidden from each other, but players soon realize that you can just ask each other what you have, so you might as well just play with the cards face up in front of you. And if everyone knows all the same information about the game state, the best player can (and kind of should) just tell everyone else what to do. This is seen as a bad thing, because the other players’ agency is kind of stifled if they’re just doing what the best player tells them to do. 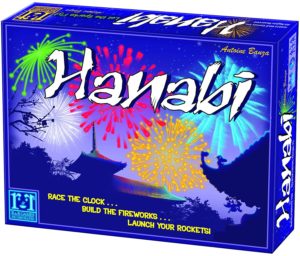 There are a few known solutions to the quarterbacking problem, all of which have some pretty large downsides. My favorite solution has been to turn cooperative games into “traitor games” (e.g. The Resistance or Battlestar Galactica). But this arguably turns what was a cooperative game into a competitive one. Other solutions involve real-time timers or weird solutions like “you can’t see your own hand” as is the case in Hanabi. I’ve also seen other proposed solutions, like “players can’t talk”, but that seems both really harmful to cooperation *and* it doesn’t even work (players find ways of communicating without talking).

For these reasons, some might call the quarterbacking problem a “cursed problem”. I think I would actually come down though on, “it isn’t a problem”. Here’s why:

In short, I think we need to embrace cooperative play, which means that yes, some player is going to be better than the other players and the other players are going to listen to that player’s ideas. I would put the “solution” to this problem in the same category of solutions to the problems you’d face while playing Chess. If you have a group that you want to play Pandemic with, you have to try and make sure that all the players have played a similar amount, same as how if you want to really get into Chess it’s best if you have a partner who is somewhere near your level. In short, I don’t think this is a “game design” problem.

With that said, one thing I will say is that most tabletop games, cooperative or otherwise, are too simple and shallow, which leads to things where, not only is the quarterback player making better calls, they are often making optimal or close to optimal calls. With a more deep, less solved game, there is more room to disagree and at least offer other alternatives to things. So one of my recommendations for cooperative games going forward is similar to my recommendations for all strategy games: make sure it’s big and complex enough. Make sure it’s playful.

(Arguably that maybe cuts both ways though too because if the skill ceiling is higher, it means the distance between the players can be further apart. A good information horizon can be helpful here somewhat.)

Ideally going forward I want to make some games that embrace “playing by committee”. This could manifest in a lot of ways, but I think there’s some overlap between this and my desire to make 1-player games. I can imagine a game that can be played by 1-4 players, and regardless of the number of players, it’s “play by committee”. That’s where I’d like to see cooperative games going in the future.

This points to a larger thing that I’ve been thinking about. I was at a really small talk with a prominent game designer a few months ago and he was talking about how the social aspects of games are what appeals to him about games. He said something along the lines of how single player games are not nearly as appealing to him because they lack that social aspect. I raised my hand and made a comment that really, all games, single player or otherwise, exist partially in those times you are not playing them, in those times you are thinking about them, remembering cool things that happened, sharing strategies on forums and chatrooms, and talking with friends about them, and so perhaps single player games could be just as social as anything else. He sort of dismissively disagreed and basically the whole room told me I was a wrong wrongguy and quickly moved on.

But I don’t know, I really think it’s true. I mean, think about Rogue-likes or Civilization, as easy examples of what I mean. How much of the appeal of these things take place not in the system itself, but surrounding the system? This isn’t to diminish the importance of the interactive merit, mind you—the more interactive merit, depth, surprising-yet-inevitable gameplay there is, the more there is to talk about.

Strategy games, or really, games in general, already have a strong social component. Which is not to say that designers should not make any choices with “facilitating social interaction” in mind; but rather to say that when it comes to thinking about something like the quarterbacking problem, we don’t need to worry too much, I think. Maybe there’s a broader question here about “agency” and how much it really matters that you personally are the person making the decision in a game. People seem to engage with games in a somewhat similar way when they frequently watch eSports or chess commentaries as they do when they personally actually play the game.

So yeah. Don’t worry about it. Make cooperative games and 1 player games. If you want to help your game be “more social”, probably the more important aspect is that you are able to build a community around that game than anything else.

Thanks for reading. If you enjoyed this article, please consider becoming a Patron over at http://www.patreon.com/keithburgun. You’ll get access to my early prototypes, free copies of my games, special Discord roles, and more.