If you haven’t played Artifact, you should give it a try, I think. Not because it’s good necessarily, although I do think it’s probably the best CCG (collectible card game) I’ve ever played. I could talk about the bad kinds of randomness in the game (pro card player Reyand basically describes the difference between variable and uniform randomness). Of course, it’s a CCG, so you have all the typical problems associated with that: too much content, imbalance, unfair match-ups, way too much for new players to learn, and so on. I’m sure the cards are imbalanced right now, and last I checked the top Steam review was something along the lines of “most powerful card is credit card.”

But I think you should play it because I think it represents, maybe more clearly, a positive trend in games generally that I’ve been noticing over the past couple of years. I notice something happening which I think represents a step in maturation of the discipline of game design.

Games are getting a lot more complicated.

Over the last year I’ve spent a lot more time playing newer games. When I got started in commercial game development back in 2008, the feeling was that games had to be simple. iPhones had small screens, people were new to the idea of touch screens, and games like Angry Birds and Farmville made everyone internalize this idea that games needed to be simple to be successful. I mean, of course the axiom that things should be as simple as possible, all else being equal is true, but exactly how simple do games need to be?

I’ve been saying for awhile now that games across the board are not complicated enough. But in the last few years, I have actually been shocked at just how complex a lot of games are. Here’s a screenshot from some “potato item shop” mobile game. 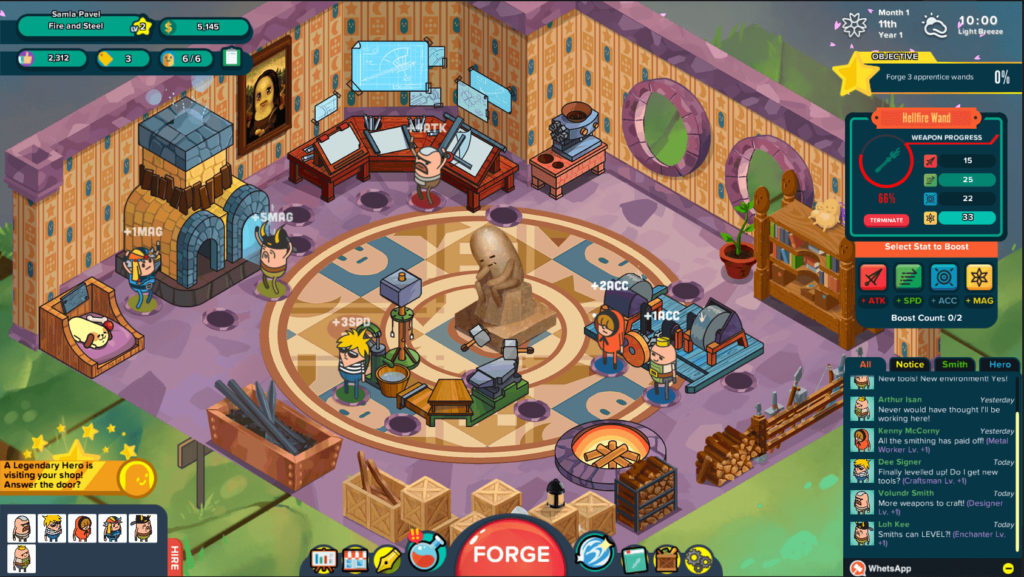 This is the main screen. Just from looking at it, it’s got about the level of UI complexity of Civilization VI. And there’s like a dozen sub-menus and other screens that are also super complicated. Similarly, I also played some Fire Emblem Heroes, and while the actual gameplay (like the tactical grid combat) during a match is pretty simple, the metagame has a mind-boggling amount of menus and submenus and weird customization features and screens and screens and screens. Overall, Fire Emblem Heroes is just a very complex game; certainly far more complex than any of the old Fire Emblem games I remember playing.

You might want to draw a distinction between “the games” and “the metagame” in terms of complexity. As I said, Heroes’ tactical gameplay is pretty simple. But I don’t think most players make a distinction between the main game and the metagame, and in the Potatoes Item Shop game, it’s not really clear where you’d draw the line between what is the main game and what is metagame

Getting back to Artifact, this is a CCG along the lines of a Hearthstone or Magic: the Gathering, but it is notably far more complex in terms of its systemic rules. In Hearthstone, the systemic rules are quite simple. You have a hand, a deck, a play area where units go. You also have a hero who can equip items and one or two other mechanisms, and that’s it. Hearthstone is not a simple game, but the vast vast majority of the complexity comes from specific rules written on cards, not from systemic complexity.

Artifact, on the other hand, basically starts off with “you’re playing three games of Hearthstone at once”, plus a much more detailed system of heroes, where heroes come out in a predetermined order, where heroes have several item equipment slots. Units have a “facing” arrow showing where they’re attacking, there’s a system of gold (separate from mana) which allows you to buy items at the end of each round, there’s a Gwent-style “passing” feature on turns, there’s an “Ancient” that appears when one of your towers is destroyed, and so on. There’s just a lot of structural stuff to the game.

I kind of see a bit of a progression here, too. Games like Gwent, and possibly even Richard Garfield’s own popular Android: Netrunner re-release may have been steps in this process. DotA-style games may also be a factor in increasing the amount of general systemic complexity players are willing to entertain, and developers are willing to risk designing.

I may have a biased view. Perhaps people can show me some counter-examples. But from my perspective, I think we’re moving towards a more complex idea of what games will be, and not just in strategy games. And this is a really positive thing, because I think our games have been just squarely too simple, which has forced us to rely on execution and bad forms of randomness to create variant outcomes. With more complexity, we may be able to start designing systems that are solution-resistant.

I don’t know that Artifact is quite there, but it sort of feels like it has the amount of complexity required to be a strong ruleset, possibly in a year or two. Actually, I’m quite disappointed that it’s a CCG, because I feel like the fact that it’s a CCG means that if anything, I predict that the systemic rules will get simpler and worse to accommodate more cards.

But however Artifact itself turns out, it has made a gigantic amount of people have to learn a ruleset that is more similar in terms of complexity to some light Euro games than it is to Hearthstone, and that itself is positive. It has “moved the Overton window” of card game complexity, and for that I am thankful.