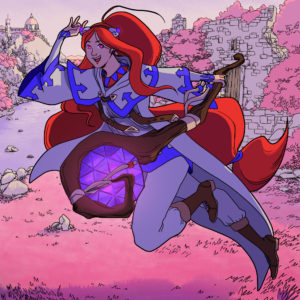 Hey all! This patch represents another massive step for the game, in that we’ve gotten rid of a lot of the vestigial stuff from when ETO (Formerly Push the Lane) was going to be a free to play game. The primary system that really was vestigial and under-developed was the cards system. I think it’s possible to take our cards system and kind of build it out into something that’s fun to use. Some have given us cool ideas like making items be cards, so your deck is your inventory, stuff like that. I think there’s a lot we can do with the system in the future, and it’s not deleted, it’s just disabled, so we can always come back to it. But for now I think it’s actually just best if the cards aren’t there.

This patch also adds another character, Lemon. She’s like a dancy jumpy wizard who bounces all over the place. She currently is not animating or playing sounds, but she should be pretty fun to play as anyway. I think she’s the most interesting character yet.

Beyond that, it’s just a nice big ol’ patch. Enjoy!

– Wisps’ range reduced by 1
– Wisps’ magic resist nerfed
– No more unlocks (for now). All content is unlocked.
– Cards system disabled (for now). We just don’t have the budget/resources to give this system the love it needs. Also, it’s sort of vestigial from when ETO was going to be a Free to Play game anyway
– Minions should no longer bunch up at the ends of the lanes
– A bunch of new sounds added to the game
– Removed lane-end chests from the ends of the side lanes
– Several improvements to win/loss screens
– When you sell items the shop actually updates which ones you can afford now
– NEW CHARACTER: Lemon, added to the game. She currently has no animations/sound but otherwise is totally functional.
– Miscellaneous bug fixes