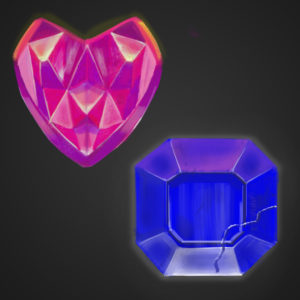 I’m working on two games that I really want to tell everyone about! They both use a theme that I’ve been working on for awhile which I’m calling Gem Wizards. More on the theme BELOW – for now, let’s get to the games. But before I do, first I want to just make a general statement that both of these games (and the theme) are very much ME, in that they’re like… really me making the games that I specifically want to play in the world. Which isn’t always exactly the thing I’m doing: I guess ETO mostly was, but Chess Mix, Jelly Bomber, and some of the other smaller projects I’ve been working on had different/broader aims than to just purely serve me and my own tastes.

Not these two games! These are both pretty much exactly what I wanna be doing with my time. Let me talk about ’em, then we’ll talk about the Gem Wizards theme a bit.

I love David Sirlin’s Codex and Puzzle Strike, and a few other games like that. I also love Euro games, of course. So I wanna make a non-CCG 2-4 player competitive card game. It’s hard for me to describe how this game works; it kind of uses a resource system that’s like a combination of Puzzle Strike and Bohnanza, with some of the unit mechanics of Magic or Codex, with a very healthy and well-respected INFORMATION HORIZON. There’s no instants, certainly no “roll a die to see if something happens” stuff. You see everything coming at least a turn in advance if not more. There’s some cool asymmetry stuff with this game too: a really, really limited “customization” that’s possible, where you can choose a color deck and a Wizard (although STANDARD MODE would be: you get a random wizard and then get the color associated with that wizard).

I’ve playtested this about 5-6 times now and even in the worst playtests it was still pretty fun. Most recently it went through some crises but I don’t know, I feel like I’ve finally “got it” about designing card games. Like, I overcame some weird blocker that was holding me back. Not sure exactly what it was. Maybe just experience. But yeah: I’m excited for this game.

I love Civilization, and I even-more-love Master of Magic, but both games have the “takes way, way too long to play a single match”. Like what the fuck… how has no one told the Firaxis people that “7-12 hours” is not even close to a reasonable match length. I dunno if they’re thinking of it as like a “campaign” or something like an X-Com campaign, but it’s really not like that? It’s really very clearly just a single “thing”. There’s no clear “stopping place” the way there is in X-Com with the missions and such. It’s just one big match, it just takes 7-12 hours to complete. I get that they want it to be “epic”, but honestly… 1 hour is pretty epic for a match of something. But I’d be happy to see them make a conservative move towards 2 or 3 hours.

And so yeah, year after year they make more and more Civ games, and other people make 4X games too, but they almost all “inherit” this 7+ hour long match length which is just terrible and impossible to balance. I like the latest Civ expansion – Gathering Storm (weirdly I am playing two games with expansions called Gathering Storm right now) – which is clearly trying pretty hard to “shake up” the late game, which of course tends to flatten out and die out just like every Civ game ever does. And they’re trying all kinds of stuff, adding all these new systems like natural disasters, global warming, a complex world congress system, all kinds of stuff, and it’s like… no one is looking at the question of game length.

Anyway this is kind of a rant and I didn’t mean this whole thing to be a rant about how ridiculously long Civilization is. I want to make a game that’s got a lot of the cool stuff from Civilization, and some of the cool stuff from Master of Magic, but in a nice 30-60 minute match. I also am not a huge fan of these hyper-minimal 4X games: I like how complicated Civ is; I like that there are really a great depth of options to pursue and lots of room for mastery. But we can achieve that in a fraction of the time.

Not sure if anyone remembers but I actually kinda made a 4X game before: Empire: The Deck-Building Strategy Game. It had some cool ideas that I think were legitimately progressive but it was also like a 6 month design job that probably needed another 5 years to really get where it needed to get (also I was working remotely with a team from Belgium which made things slower than they’d otherwise be).

So yeah: I want to make a 4X game. Here are some of the qualities I have in mind for it:

I’ve already started on the design and the codebase. So I’m OFF! And the cool thing is, I can reuse art from the card game for the 4X and vice versa. WOO! Send me money if you like what I’m doing! Here’s some details about the Gem Wizards theme.

Basically it’s a high-fantasy-ish world with a bunch of factions and stuff. Some of them are sort of “normal-ish”, as in, stuff you might expect to see in a videogame or fantasy board game, but some are really weird but as an example, one of them are the Veggie Faction, and they’re all huge sentient vegetable people. And the Buggies are bug people, and the undead people are like party animals kinda. Also the factions are not strictly along species/race lines – well, some factions are, but the pink and white factions are totally not at all. Other than that, I basically just want it to be colorful, inviting and whatever else the opposite of the League of Legends theme is. Here’s a little sketch I made a couple weeks ago of some random off-the-cuff ideas for what characters from the factions might look like.

The basic idea is that it’s a magic fantasy world where people get their magic powers from gems (like those you see in the top right of this article!). Pretty simple. Gems are cool because of Steven Universe. But yeah it’s a fantasy world that’s broad enough to support whatever weird, stupid shit that I always try to do in my games, and usually someone tells me “don’t do that stupid thing, that’s too stupid”. This time no one will be able to tell me that. Actually I guess people will still be able to tell me that but I will probably ignore them this time!!! 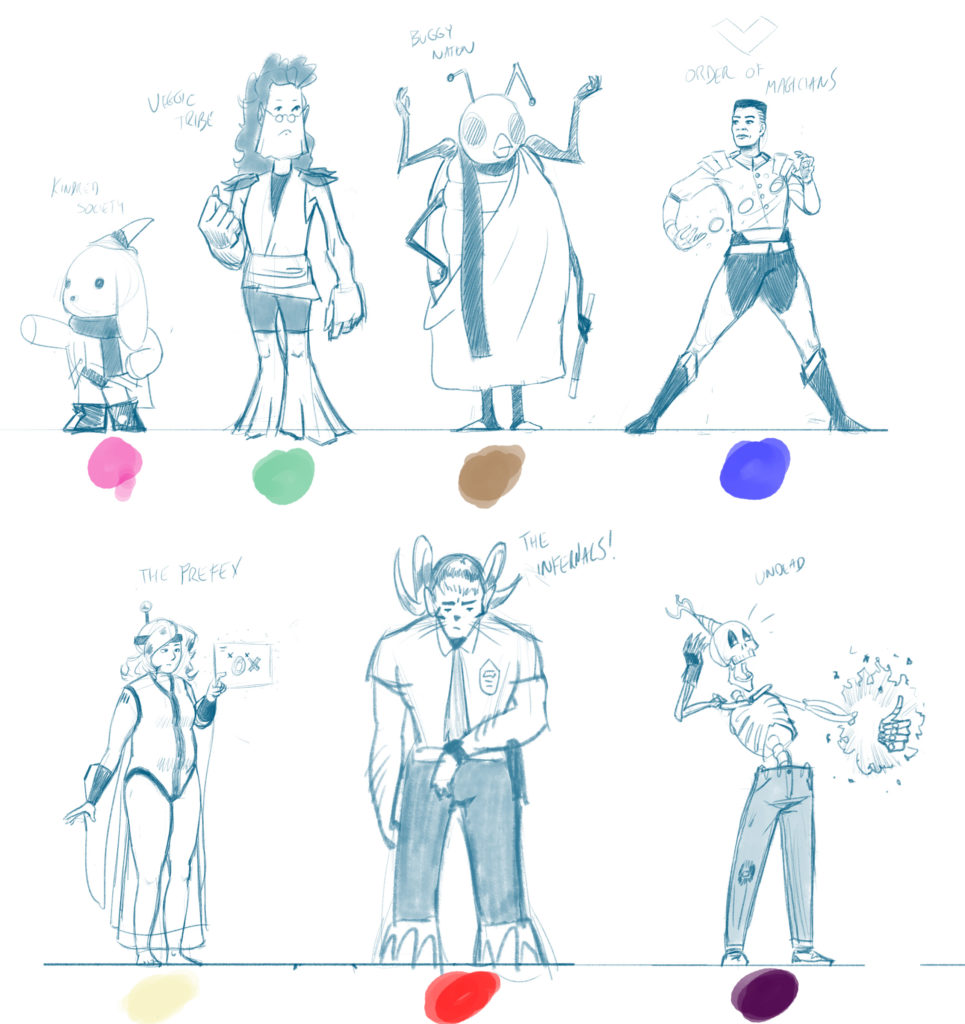 So yeah obviously none of this is set remotely in stone. And how they manifest in the two games will be radically different of course. The crucial and cool thing is that I can keep sort of building onto this world from two different games, and also, more importantly, as I already said, I can re-use art, which is pretty important when you’re just one fella! I may end up getting some friends to help out with art too, we’ll see how it goes.

Anyway, that’s about all for now. Let me know what you think of this stuff! Catch you later!