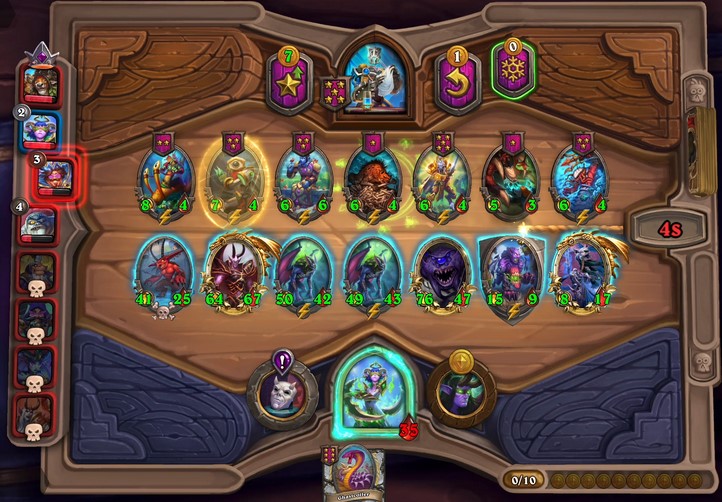 Hey all! This is just a short little article where I will try to make the case for why I think Hearthstone: Battlegrounds (which I’ve gotten back into now that the Buddies system has been removed) should end after four players have been eliminated.

Currently, for those who don’t know, HSBG is an eight-player FFA game. Typically, you might expect that whoever comes in first place is the winner, and the rest of the players are losers. But in HSBG, the rules say that the “top four” players are winners, and indeed, this is reflected in your Elo change after the match.

Let’s take a moment to discuss that rule quickly, because the premise behind it is really sound I think. I wrote an article last year where I talked about “randomness absorption thresholds” which is relevant here. Basically, numbers in a game that are influenced by randomness can kind of go wild sometimes. Some number might multiply some other number several times, and become way too big for game balance normally to handle. But then you have these “randomness absorber” mechanisms that cut all that off. An example would be if you have a Magic: the Gathering creature card that somehow gets 100 or more power; on its face, you might think that that’s way too high a number for a creature to have. But the way the system works, you can block that with any creature, and all of that excess power is basically discarded or ignored in a sense, when killing that creature. Effectively, no matter how much power a creature has, it really only effectively will “have” as much power as its target’s health, if that makes sense.

This sort of thing is really good at bringing these otherwise wild numbers back down to earth in a way that is more balance-able and creates healthier, more structured and predictable gameplay. But it also makes the random values “less specific”. I don’t need to know, and the system doesn’t really need to care, that your creature has 20, or 50, or 100 power; I only need to know that it has more power than my creature (or I myself) have health. This is great, because it massively reduces calculation and stress.

HSBG should end after four eliminations

Hearthstone: Battlegrounds is a great game, but it’s quite random, especially when you look at just a single battle. Units attack each other in a mostly random sequence, and the order in which this happens can absolutely make or break a single battle. And late game, when there’s only 2-4 players left, a single battle might be what decides who’s in first and who’s in second. And HSBG, like MTG, is a game where largely random events can dramatically change the power of certain cards. So there’s a valid question here of whether we need to be measuring the difference between 1st place and 2nd place.

At the same time, the game is too damn long! I feel like my matches, especially if I do well, go on for something like 30-45 minutes or longer. Especially as compared with a quick game like Marvel Snap, I have to really ask myself, “do I have the time right now to commit to a huge Hearthstone: Battlegrounds campaign“? There’s no overall correct amount of time-length that a game ought to be, but I generally feel like HSBG goes on for way too long for what it is. (I’ll say more about this at the end of the article.)

What if we ended the game when one or more players have won the game? I mean, typically, “end of match” and “winner declared” happen at the same point. And the cool thing is that, instead of measuring and caring deeply about which of two extremely wild random 100+ power cards got slightly higher than each other, now we can employ a Random Value Absorption Threshold and just get a sense of which players did better in a general way, and leave it at that. To put this another way, I think a lot of the difference between a 1st place and a 2nd place player is going to be just measuring a bunch of random noise.

Also, in my opinion it is simply weird to tell players “you’ve actually technically already won, but… the game is continuing to go on anyway”. It’s also similarly weird to have two kinds of “winning”, the “actual” win (which I guess is the top 4?) and the Bonus Win (which I guess is 1st place). I know some people might argue that this is a good thing for the game, but, at the very least you can grant that it would be cleaner and more elegant to just have one clear goal for the game.

Currently, players need to play for two goals simultaneously: getting into the top 4, and getting 1st place (arguably… maybe also getting 2nd and 3rd place are their own goals, too?) Will the strategy for the game change, if you no longer have to battle for the top spot? Yes. But that’s okay! I don’t see any reason why it would change for the worse. It seems perfectly reasonable to expect that the game can be tuned to support “getting into the top” as the one goal. Most games only have one goal, and they work fine!

Side note with respect to the length of the game: it would be fantastic if HSBG and all Autobattler games would use the async concept from Super Auto Pets. I might be overlooking some technical reason that this would be difficult, but… I feel like it must be doable, and it would also be fantastic to get rid of all these long wait timers between each match. There are of course other ways to shorten the game; I am really not convinced that these games need specifically eight players. I think this game might work great with three, and I wish they’d try that out! But it’s more interesting to me to use this example to help us think about concepts like the random value absorption threshold.

Anyway, let me know what you think! And thanks for reading!