Here’s an update on how the Kickstarter is doing:

As of the time of this writing, it was just over 90%, in under a week! Feeling really good about that. I’ve also been working hard on the Bridge Hacking Expansion, finishing up some art and doing some playtesting. Here’s some good news: it’s all going really well! Here’s some deets on it.

Bridge Hacking!? In a card game???

They said it couldn’t be done. They said we didn’t have the technology. They said a lot of weird stuff—I don’t know what that was all about. But I DO know what this expansion is all about, and it’s this: making the game BIGGER, making it feel like a richer strategic space to live in. We achieve this in the typical way of just adding more content, which we’ll get to, but also by adding a whole new axis of actions, and a resource system: Bridge Hacking, and white gems.

There is a pool of 10 White Gem cards (they’ll be tokens in the Deluxe edition), and anytime you BUMP the opponent, you can gain one (yes, this means you can use Green Gems to bump up to three times at the end of your turn and basically convert them to White Gems). You can also get them from the Hack card, and in a few other edge-case ways. If you need to draw one from the pool and there are none, you draw one from the opponent instead! 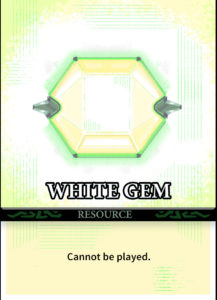 White gems can only be used in one way: by playing the new Hack card (of which there are two copies). Hack lets you either draw 2 White Gems, or play a Bridge Hack. At the start of any Dragon Bridge match, three Bridge Hacks (of nine total) are drawn out and played face up to the table. These can be thought of as special cards that are in everyone’s hand, all the time, all game, and they do various strange things. Here’s one of my favorites: 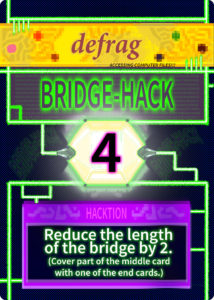 This one literally lets you change the length of the bridge. One of them lets you draw another character card (now you have their passive as well as your own). One of them lets you steal a Magic Item from the opponent. All kinds of weird, neat stuff. Each game, there are three of these available, and the three that are there never change—this is something that gives this match identity, something which is important to me.

In playtests, the whole mechanism works pretty well, and gives players just enough “overhead”; there’s just enough extra stuff going on, or potential stuff that could happen, that players feel like they more often have options for counter-play, while not feeling overwhelming. I’m happy about it, especially given that it’s an optional feature. The game works great with or without it, but I think more seasoned players will prefer playing with it most of the time.

As I’ve mentioned elsewhere, in the Gem Wizards universe, there are seven factions. But in the base game, only five of these factions are represented. So, for the expansion, the two un-represented factions (the green Magic Bug-People and the white Alcove Prefecture) now have TWO characters each (plus one Business Demon who strong-armed his way into it).

We already revealed May Danaris’ artwork in the previous post, but today I want to show her card, plus the card for Omar Evans. These still may change, but they’re a decent example of what I generally want to do with these characters: make more complex characters who can do weirder stuff, but who are still comparably balanced with the base set.

May starts off weak and becomes stronger after she loses the game once. When you first beat May, she can discard a Magic Item to ignore it and flip her card over to its back side, which lets her Hack more easily (in addition to… she didn’t lose!) It’s an interesting power that I’ll be keeping an eye on over the next few weeks. 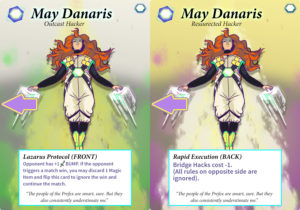 Omar Evans is a Green Gem master, and a ninja. Here’s his card! (Click on it for the details.) 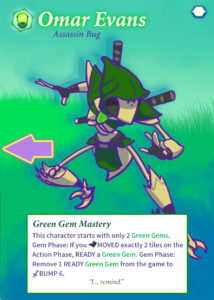 So, Omar starts off with only 2 Green Gems, instead of the normal 3. This means that he can only ever possibly get 1 magic item (the first Magic Item you buy costs 2 instead of 3), and it means he’s a little more vulnerable when cornered. Also though, he can sort of passively gain Green Gems faster than other players by moving 2 (a weird number of tiles to move; it means you’re hard limiting yourself when playing a card like Run to move only 2 even though it allows moving 3, for example). Omar also has the ability to perform two sort of “Final Slashes”: he can discard one of his Green Gems from the game to Bump 6! So he’s a good Rushdown character, or could be good econ character if he picks up an item that works for him.

Talk to you soon!