Did you know that the origin of the word “handicap” is “cap in hand”, thereby suggesting a connection between disabled people (who in the past had been referred to often as “handicapped”) and street beggars/panhandlers? 😬 It definitely seems worth moving on from this term and using another term in its place. While we’re at it, I think we could spend a little time thinking about how these sorts of multiplayer “re-balancing” tools work in games: how we think about them—and why so many of us refuse to ever use them. I’ve been thinking about this a lot for many years, and I think there are much broader game design lessons that we can learn through the unpacking of this concept.

What players of strategy/competitive games really want to know is, “am I getting better?” This helps them understand whether the things they’re learning about the game as they’re playing are correct things to learn or not. Really, this feedback is crucial: the skill of the game is ultimately demonstrated by the ability to produce wins. A pro player playing against a child can’t really tell if he’s learning any new lessons, because he wins 100% of the time he plays.

I think people have an implicit understanding of this. If there’s an option to pair two people against each other who are of similar skill level, you’d always do that over pairing players of hugely disparate skill levels. Our matchmaking systems also do this, of course, bringing as many people as possible as close as possible to a 50% win rate. If you study and get better and get good takeaways, you’ll start winning more. With a 50% base win rate, those wins are meaningful, which allows them to really be “testing” certain theories and getting good feedback.

There is a sense in which all games could be looked at as “1 player games”. When we play a game, we are always only playing from a single player’s perspective. We perceive things from just one perspective (our own, not our opponent’s), and we make choices for just one player (ourselves). In the case of highly systemic, deep strategy games, I argue that we not only can look at games as though they were all “1 player” games, but that we should. By doing so, we can focus on making players have a balanced difficulty, but it can also lead us away from rules that lead to “griefing”.

This bit is a bit of an aside, but I think it’s worth thinking about while we’re here, at least as an illustration of this one-player perspective: I’ve been playing a lot of Magic: the Gathering recently (as I’ve mentioned in recent posts), and this experience has made me feel more strongly than ever about this theory, especially with respect to the griefing point. In MTG, there are a great many rules that feel great for the player doing them, and terrible for the player who is having it done to them. Some examples of these would be removal (cards that directly remove other cards from play), sweepers (cards that remove ALL cards from play), and counterspells (spells that negate the effects of another player’s spell). All of these may be quite fun to play for the player playing them, but often feel pretty bad for the target. From this article, Confessions of a Griefer,

It’s fun to play a nice, big dude. It’s not fun to have it stolen, get hit with it, then see it sacrificed…

I love to have fun but—too often for justification—my fun is coming at the expense of other’s fun.

While the conclusion of this article is that it’s okay that MTG lets you do things which are super-not-fun for other players to experience, it’s been my experience that Magic players will defend almost anything, as long as there exists some counter to that thing somewhere in the giant universe of cards. In my opinion, it’s a no-brainer that we would choose to avoid “a player is not having fun”, all else being equal.

When we adopt a “one player perspective”, it would lean us away from doing anything that feels “good for you at the expense of the other player”, because this player is also the “other player”, and we’re designing it from their perspective. Whereas the traditional way to look at two-player game design would be to look at it as a larger holistic experience that two players are each engaged with.

While you could argue that any interaction between players at all is a little bit Grief-y (i.e. capturing my piece in Chess is removing my piece from play, and kind of feels bad for me), I am definitely not saying that all games should be come “mulitplayer solitaire” Euro-like experiences. I think there’s a very wide spectrum of Griefyness, with games like MTG being at one end and perhaps some Euros being at the other end. My point is simply that this is something we should consider, and a single-player perspective can help us do it. (It may be a little bit like John Rawls’ “veil of ignorance” concept: as you’re prescribing rules, consider that you may be getting the worst of the outcomes that are a result of those rules.)

As I said, we need a different term for this concept anyway, so for this article, I’ll be using the term “difficulty settings“. This probably sounds strange at first. But if we are thinking of games from a “one player perspective”, it makes sense! If your ranking in Go is 1k, to choose to play against a player who has a rating of 5k is very much like selecting an “Easy” mode. You can then restore the balance by implementing a difficulty setting. In Go, this is done by adding stones to these points for the disadvantaged player. 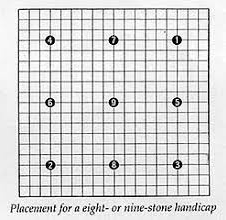 Fighting games and many other competitive games offer these sorts of difficulty options for players, although in my long and rich life of playing such games, I’ve never encountered a person who was willing to use them, even when it would be in everyone’s interest to do so. For Go players, it’s a totally natural thing to do, so I feel like there isn’t anything “natural” or objectively correct about people’s unwillingness to use these settings.

What are the arguments players give against using difficulty settings? That it’s “not fair”, or that it feels “cheap” in some way. To address this, let’s review. There are two things that a two-player strategy game’s outcome can communicate to a player:

These are two distinct questions. For social and cultural reasons, there is a lot of weight, especially in some competitive genres of games, on question 1. I think this is a mistake. I would argue that question 2 is a much better, healthier question to ask. It is less oriented around “socially sorting yourself above another player”, which is… probably not a healthy thing to be too concerned about. I think the universe where people were all more concerned with question 2, is a much nicer universe to live in. And really, the most positive-sounding explanation for caring about question 1 ultimately comes down to “it leads us to an answer for question 2” anyway. Why do I care about beating Steven at MTG? The bad reasons would be stuff like “because F that guy!” or “To show him/others I’m better than he is!”, whereas the good sounding reasons would be something more like, “because it helps me see that I’m improving as a player”.

I think everyone would have a better time with competitive games if we started thinking about games and game design from a one-player perspective. Thinking of games in this way will nudge us in the direction of creating less grief-y, better-feeling games that are more social and more efficient, with each match telling us more about the growth of each player.

The question of how to implement difficulty settings is a difficult one. There are certainly examples of such settings I’ve seen which don’t work that well, which mangle the gameplay in a way that makes it just not work correctly. There is also a question about how players can figure out what the proper difficulty settings would be for them and an opponent. (In the case of online games, this would be much easier to figure out, but online games also typically have enough players that they aren’t necessary; you can just match players against a player of roughly equal skill).

Let’s start using a different name for these sorts of difficulty settings, and maybe next time you have the occasion to: try out actually using them!

This article was made possible by my Patrons at www.patreon.com/keithburgun.

(This article is somewhat related to an article I wrote about five years ago called “The Default Number of Players is One“, so I’d recommend checking that one out after reading this.)