This summer, specifically the month of July and the first half of August, I decided, “I’m going to make a game”. Many factors in my life had sort of come together at the same time to allow this. My programming abilities and my level of comfort with Unity had both come to a point where “I could make a thing” and where I can get around most problems I encounter (even if that means creating 10 bigger problems for future-me). I think I also felt that because 100 Rogues took two years, Auro took 5-6, and I haven’t put out anything since Auro, I just really needed to get something out the door, desperately.

I think my average time working in July was something like 10 hours a day, most of which I streamed on my Twitch channel. I think my record was around 13 hours which I hit a few times over. The streaming thing was a bit of an experiment for me; I haven’t done much of that except the recent Dinofarm streams. It works well for me though. It keeps me on task, while also being maybe 10% social, just enough to make me feel like I’m not totally isolated. I usually had 1 or 2 viewers, sometimes as many as 5 or 6, and often zero viewers. But if there was even one, it was pretty great. Viewers had a ton of great comments and questions and there have been a lot of good discussions on the stream. 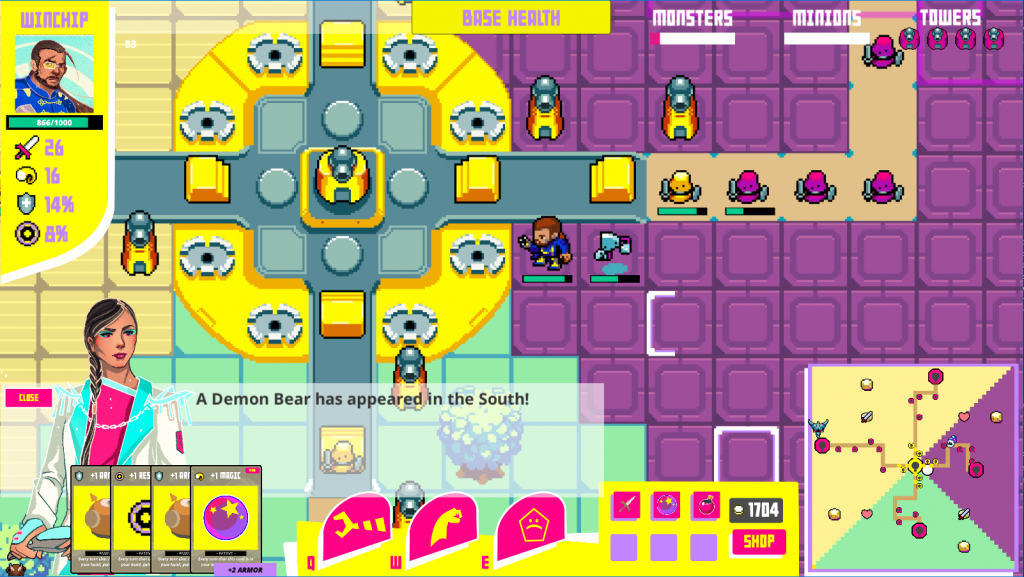 The result of all this work is that I now have a game that’s playable! Here are some of the features that Push the Lane currently has:

What’s been hitting me the last couple days is that what I have here is a framework for a game. I mean, in many ways, it is a game. You can play it, and there are strategies and you can get good at it. I could probably just spend this week polishing this game as it is and then just add more content from here and I think people would think it’s a decent enough single player videogame.

The entire Clockwork Game Design thing can be worded as a methodology for “avoiding the trap of making a management game”. Most videogames, and many board games, are really just “there’s a lot of things going on. Manage them all in a way that makes you come out on top”. That’s alright, and that kind of “works”.

But without resorting to output randomness or other Skinner-box-like hooks, it’s hard to make a management thing interesting for very long. And I think that’s sort of the problem Push the Lane has right now. I designed it with a core mechanism in mind: lane-pushing. But as I was constructing stuff for the game, I was also constrained by two things: wanting to be accessible, and time limitations.

I want this game to be accessible. Yes, I can pretty easily come up with some semi-abstract designer-board-game-like rules that will totally support that core mechanism of lane-pushing, but videogame players, by and large, will have to learn that stuff, and it’s pretty unappealing for most people. I want Push the Lane to do with League of Legends does: be a videogame first, but sneakily support the core. That’s why there’s a lot of fighting, casting spells, buying items, power growth, and that sort of stuff.

So basically, I had enough time this summer to “make a game”, and I did do that. But I didn’t have enough time to find a slick answer to “making a core-mechanism game that also happens to support the set of rules that videogame players already are comfortable with” – the “videogame rules”, if you will. That’s hard!

I am confident that I will find those answers. I still have a few days left, so maybe something will come to me in that time.

But there’s one other factor that I kind of forgot about: I’m a human being! Over the last couple of months I have not been taking care of basic life business, like having social interactions, house chores and so on. I also need to get back to doing freelance work, which is usually my day-job (had a hole in the schedule this summer which I took advantage of).

So, while I maybe could come up with these new gameplay rules and implement them in the next week, it’s probably better if I just clean up what I have and shoot for an “early access” release. One thing that has been really helpful has been player feedback. Special shout-out to Bucky, who also was probably the world’s top 100 Rogues player (and he’s still writing great 100 Rogues guides if anyone’s interested!) So hopefully Early Access can help me get a community excited about this game.

Also I want to say THANK YOU so much to my Patreon supporters who were a big part in allowing me to get this far with this game this quickly. In particular, a special shout-out to Aaron Oman, and Jean-Marc Neilly. Thank you so much, everybody!

Stay tuned, because I will probably have an announcement within a week about Push the Lane! being available for everyone to try out. <3