I write a lot about how bad output randomness is for games, but today I want to write about a problem common in many deterministic games – specifically ones that lack hidden information.

Why doesn’t everyone just play chess, if it’s so great? The answer is that chess, or other ancient abstracts like Go and shogi, or even modern abstracts like the Gipf games, Through the Desert or Hive – these games really aren’t that great. They are all largely “look-ahead contests”, and people pick up on this, consciously or subconsciously, and it makes them all kind of annoying to play.

Here’s the process of look-ahead in action: what will happen if I make move X? Once move X is made, what will happen if the opponent makes moves A, B or C? If he should make move A, then I can make moves D, E or F… and so on. It’s literally scanning through every possible (or reasonably valid-seeming) move that you can. Games of chess, at least at novice and intermediate levels of play, tend to come down to simply who does more of this. One way to put it is that it’s a matter of quantity, not quality.

As with any exponentially-expanding possibility tree, no one can really scan the entire possibility space, or even come close with super-complex games like chess and go. So we do have to make some heuristic loose choices based on loose patterns – the kind of thing that we expect to be doing in a strategy game. Not “blind guesses”, but not “the solution”, either.

Of course, these kinds of games – when played seriously – are almost always played with a timer for this reason (as well as others). However, this does not solve the problem. That simply changes it to “how much of the decision-tree can you explore in 30 seconds?” You still have, to some extent, a look-ahead contest.

The problem is that look-ahead is uncapped in chess. The entire state is there for you to calculate out, and this is not only something that can undermine the kind of strategic decision-making we want to foster, but it also is oppressive to people. Knowing that the answer (or at least a strong answer) is there –  you just have to sit there doing a hundred easy problems in the next 30 seconds in order to get it – feels crappy.

A recent example of a very interesting game with no randomness and no hidden information is the successfully Kickstarted Prismata.

When I first read the rules, I could see that, similar to chess, there really isn’t a lot of interaction between game elements. Basically, things can absorb damage, deal damage, or give you a resource. Despite being a complex game that’s difficult to solve, I could tell almost immediately that the method for playing the game would be to simply sit there and do a bunch of easy math problems very quickly, because that’s all that’s going on. There is nothing else in the range of actions you can do, despite the fact that you can theoretically read ahead to the end of the game.

Some of the most high-level players in the game have confirmed my suspicions. For instance, this Dinofarm Forum post, where a high-level player named Captain says similar things. As a result – sure, maybe it’s a good “game of pure strategy”, but as Captain says, “Prismata is a bad game at being fun to play”.

Even the designers appear to be at least somewhat aware of this problem, as they’ve been pushing for severely short timers and adding tons of content in order to try to “loosen up” a system which is inherently a “simple math problem contest” (again, quite like Chess).

The first half of solving this problem is by carefully introducing hidden information.

What we should be doing with our deterministic games is giving players just enough deterministic space in front of them so that they both cannot solve it and also hopefully have numerous attractive-looking options. There should be just enough complexity here to allow for real, creative problem solving.

… And no more. Beyond a certain point, things should be hidden – we can call this point the “information horizon”. Fog of war is a decent example of how some games already do this – one can imagine a StarCraft without fog of war and what a nightmare that would be.

Up front – having hidden information at all necessarily makes your game more random. However, if you’re careful, it can be a very slight increase in randomness that is certainly preferable to the oppressive look-ahead that is the alternative.

It’s a very difficult balancing act. If the information horizon is even a little bit too close, the game becomes too random. If it’s too far out, you risk having a look-ahead contest problem. You must find the right balance, and have a system that is rich and interesting enough to allow for creative play within a restricted space.

Of course, you can’t just take a game like Prismata and slap some hidden information on it and expect it to work. Prismata’s elemental bits are just very simple and very direct, and so reducing the known area is a bit like having people play chess on a 3×3 board or something – the game will get totally solved almost instantly.

In order to have a relatively near information horizon, your game’s rules have to be deep. 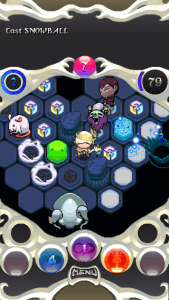 I don’t often like to use my own games as examples of my design principles, but in this case, Auro: A Monster-Bumping Adventure is one of the best examples of this principle in action. If you’re unfamiliar with the game, watch this video or read the manual to learn the basics.

Essentially, it’s a turn-based tactics game, where you’re a single actor (Auro) on a hexagonal grid. You can push monsters back a tile, move, or cast spells that cause other effects. As you’ll see in the video below (played by Ludite Sam) the amount of complexity gets very high.

How is it accomplished? It comes back to something I’ve talked about before – the clockwork design pattern (I’ve also got a book about it). Auro has a strong core mechanism and supporting mechanisms, laid out in an elegant, intentional way. Because of its elegance, it’s able to achieve huge depth despite having a pretty restrictive information horizon.

If you compare Auro to chess, Auro is like a dozen interesting problems, and chess is like a million rote tasks. The kinds of combinations you can make in Auro are numerous – things interact with each other on many, many different levels. In chess, things are basically in each others way, threatening to kill, or killing each other. Those are the only interactions that exist in the game. You can’t really do anything in chess, except just make sure your units are killing their units. The same goes for something like Starcraft – or really, most games, which as I mentioned in my 3 Minute Game Design episode on depth vs. width, are wide games, not deep ones. They have tons and tons of shallow interactions.

I mentioned Through the Desert at the top – it’s worth noting that this game has a bit more of a “clockwork design” and is a bit more elegant than most perfect information abstract games. In fact, many designer Euro games are pretty good on this front – games like Puerto Rico or Agricola do a decent job at maintaining this balance (even if they have other problems).

As a side note, this issue of carefully placing your information horizon presents a real problem for physical game designers. On a computer, it’s easy to hide whatever information you want, with things like fog of war or other hidden variables. With board games, it’s very difficult to get the kind of nuanced control over hidden information that you can with digital games. In board games, it’s pretty easy to make everything hidden or everything open, and a few other arrangements are easy, but something similar to “fog of war”, for instance, has always been a notorious challenge for board game designers.

With that said, you basically have three options:

1. Create a perfect information, deterministic look ahead contest, like chess or go

So, if you can’t do this without a computer – start developing computer games. While option #1 is certainly a lot harder than option #2, option #3 is by far the hardest to accomplish. However, they also are the most enjoyable, deep, efficient and rewarding games to play.

This website is supported by the patrons at Patreon.com. If you enjoyed this article, please consider becoming a patron!